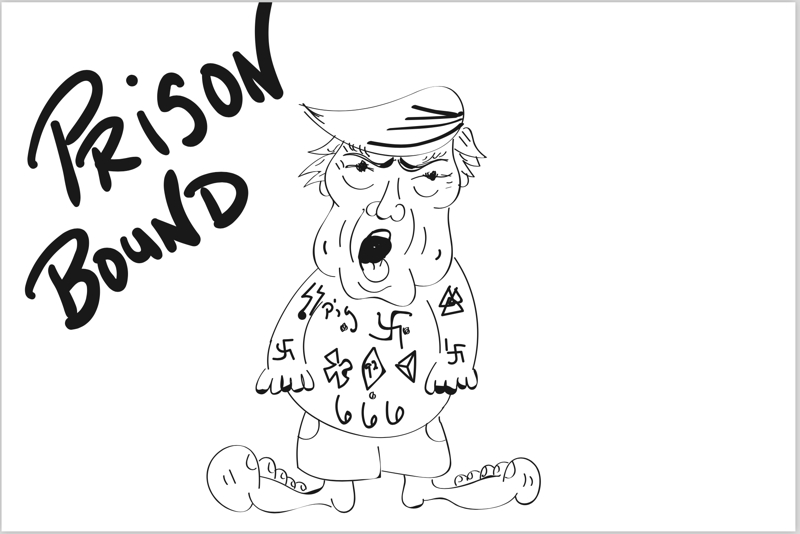 So, I’ve got a question for you, oh my friends and neighbors. To wit, what do we do with der Drumpf? I mean, afterwards?

To explain: let’s assume, for sake of happy assumption, that he is ultimately removed from office for conduct unbecoming of a gentleman. Or, for that matter, unbecoming of pretty much anything else. Including head lice, pond scum, and gum infections.

Okay, then what happens after that? Where do we send him?

Well, in the best possible scenario, off to prison he goes. Say, one of those for-profit prisons that’s just choc-o-block full of folks who were arrested for trivial offences and then sent off to hellholes for decades and decades because, gosh, that’s how you make money in the for-profit prison business. I mean, really. You’re expecting justice or something? Silly of you.

And anyway, one of those prisons would be just fine for a former Commander-in-Thief. He’d fit right in. And I’m sure that the rest of the prison population would be delighted to welcome him into their midst. And gang showers.

But, attractive as the prospect might be of his nibship doing competitive pushups for Marlboros and turning used toothbrushes and razorblades into big, fat beautiful shivs (the Mexicans will pay for ‘em), let’s confess. It isn’t very likely. Our Elites tend to protect each other. So, I’m afraid, there’s a real chance he’d be sent to some sort of extra comfy Club Fed…sort of Mar-a-Lago with Gucci Ankle Monitors.

Which means that we need a Plan B. And here’s my modest proposal. Let’s promote the idea that instead of a cellblock, Trump should be sent into some sort of pleasant exile, sort of like Jean-Claude (“Baby Doc”) Duvalier’s fun filled, albeit unexpected and permanent vacation to France back in the 1980s.

We just need to figure out where to send him. I think a nice tropical island is our best bet.  Something with palm trees, soft breezes, and unsullied beaches.

I’ve even got a specific island in mind.

You remember that place that King Kong was supposed to come from? The one with the dinosaurs and giant simians?