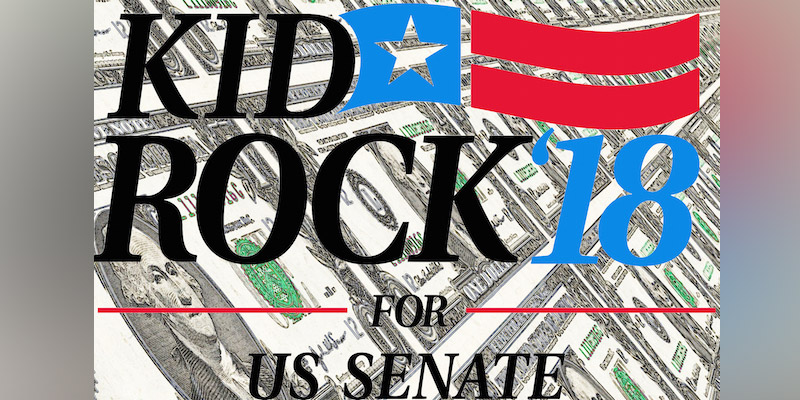 By Thomas Hudson, President and Treasurer of Progressives for Prosperity

Editor’s Note: With this issue of LR, we welcome a new contributor, Thomas Hudson, who is also the President and Treasurer of the organization, “Progressives for Prosperity.” Mr. Hudson’s background is in political science and economics, and we look forward to having his insightful commentary on the site.

Vulgar musician – well, glorified noisemaker – Kid Rock might be running for the US Senate against incumbent Democrat and dedicated public servant Debbie Stabenow. Kid Rock has, for months now, teased a potential candidacy and hinted at major announcements, but has yet to decisively say whether he will follow Donald Trump into the world of political hobbyism. As with any political hobbyists, Kid Rock’s motives are entirely clear: He wants publicity.

It comes as no surprise that Kid Rock’s Senate flirtings have coincided with the release of a new album and tour. A career fading into irrelevance needed a boost, a shot of adrenaline to once again propel Kid Rock into screeching glory and prominence. Kid Rock saw the ceaseless and breathless media coverage Donald Trump received and hoped to earn a fraction of it. He saw Trump’s books again climb the best seller list; he saw millions spend hard-earned money on Trump hats and shirts and other merchandise; he saw the ability to profit and sought it.

And he’s succeeded. His Senate “announcement” boosted his new music and turbocharged the start of a new tour whose ticket prices reach $315 a pop. Kid Rock’s Senate website sells T-shirts and hats and has already sold out its bumper sticker collection. Missing from the website? Policies and any serious indication that Kid Rock cares about the people of Michigan.

Obviously, this entire stunt is designed to boost Kid Rock’s popularity so he can make more money. That hasn’t stopped once respectable Republicans from endorsing a man best known for his profane-laced rants for the United States Senate. Rank and file Republicans as well as the elected leaders from whom they take cues have furthered this publicity stunt by prematurely supporting a potential candidacy and not standing up to the erosion (or potential erosion) of our institutions.

But that really shouldn’t be a surprise given that these same Republicans all backed Trump despite his affinity for lies, reckless rhetoric, clear bigotry, and admitted sexual assaults and the likelihood that he hoped to parlay his candidacy into a commercial enterprise. Hence Trump’s apparent interest in starting “Trump TV” had he lost. Republicans have stopped caring about quality, dignity, and competence; instead they care about opposing Democrats.

party’s primary reason to support a candidate is because it would anger the opposition, that party has no rational reason to exist. It doesn’t push policies or fight for the country. It fights for rabid partisans who view the country in a tribal mindset in which only one group can win. Unfortunately, the Republican Party has descended to these shameless actions. Kid Rock has no place in the Senate and Republicans know that – but rather than combat or stop an egotistical blowhard from degrading the Senate, Republicans are ready, once again, to appease its increasingly know-nothing base.