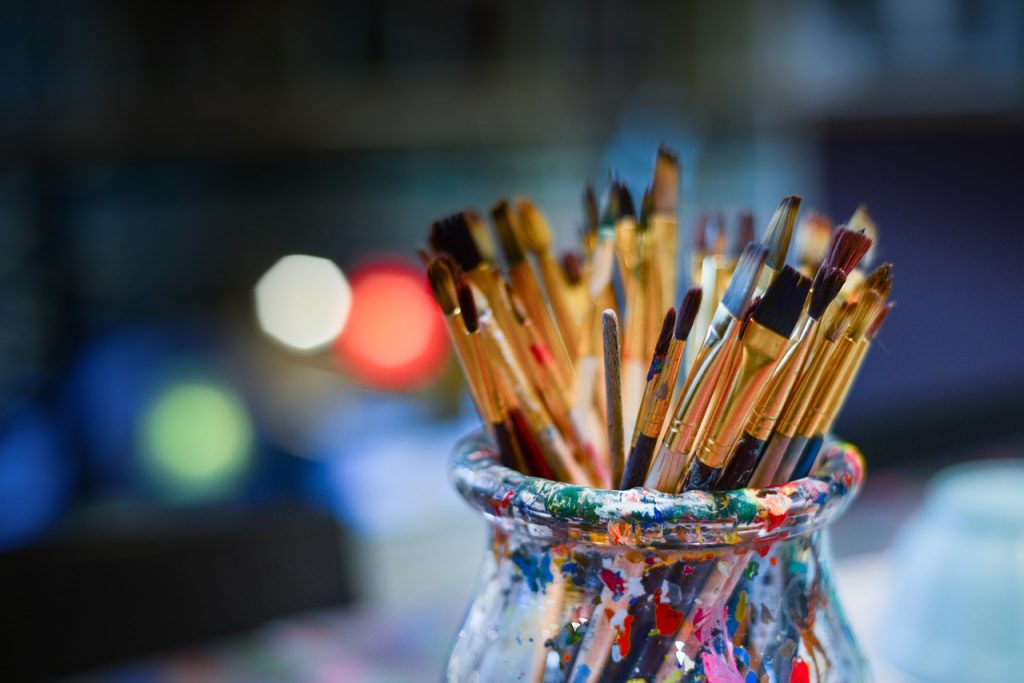 Just because people on the left are understandably worried about the iminent end of the world, there’s no reason we can’t take some time out for levity – in this case to laugh at the paintings of Jon McNaughton, a man who falls into that all-too-common personality type, “as creatively prolific as he is mentally unstable.”

I appreciate that all art is subjective, but seriously: LOOK at this shit. 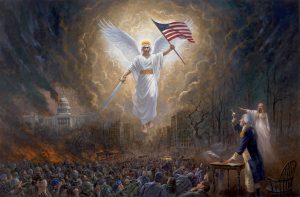 That little gem is entitled “Angel of Liberty – The Vision of George Washington,” which seems to imply that Washington was surprisingly on-point in his predictions of what people would be wearing in the future, but also that he knew there would be some sort of apocalypse that would set fire to the Capitol building and that, in the middle of it all, an angel with enormous, out-of-perspective feet would show up with a sword. Who knew Washington was on that many drugs?!

Moving on to more contemporary issues, here’s President Trump depicted attacking Robert Mueller and threatening him with a magnifying glass. 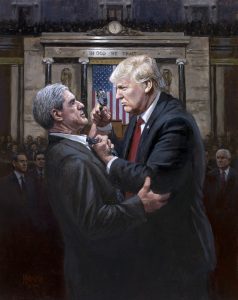 I don’t think I can say anything better than McNaughton’s own description of this masterpiece, which reads: “There has been a crusade in this country led by a group that wishes to overturn the election and impeach President Trump. Robert Mueller leads a special council of at least 17 partisan Democrat attorneys who have yet to find a single piece of evidence against the President, yet they ignore the mounting verifiable evidence against Russian collusion with the DNC and the Clinton Foundation. The political bias and negligence of those who have lead the Department of Justice and the FBI is forthcoming. There comes a time when you have to take a stand to Expose the Truth!”

Jon McNaughton is every bit as good with English as he is with a paint brush, and that’s not any sort of endorsement. In fact, all of his paintings come with lengthy descriptions of what they’re meant to depict, because great art famously never speaks for itself. My personal favourite is a painting where Jesus (who is a white guy, of course) gets thrown out of the State of the Union address (which he was giving because somehow Jesus was president in this one? It’s not clear…) and McNaughton has crafted an entire long backstory to go with the nonsensical moment.

Elsewhere, this is happening: 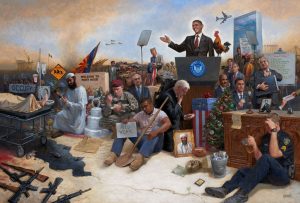 I can’t even begin to guess at what’s going on here, although it seems like a pretty good depiction of the madness jabbering away inside McNaughton’s head. Mitt romney is some sort of Oompa Loompa, or else stuck in the floor. Osama Bin Laden appears to have signed a football for someone, although I’m not sure why – maybe Bin Laden only turned to terrorism after a knee injury sidelined his NFL career. Thing from the Addams Family appears to be making a cameo behind a picture of Abe Lincoln. I also can’t help but notice that President Obama has a large cock; I’m not sure if that’s racist…

Hilariously, Jon McNaughton seems to be of the opinion that this painting speaks for itself, and in the accompanying description he dares us, the viewer, to research anything we don’t understand.

Frankly, I don’t have that kind of time.

Here’s a personal favourite of mine, “Teach a Man to Fish.” We’re told that’s meant to be President Trump on the right, teaching a young student to put aside his books on Socialism and “Justice Warrior,” and instead… go fishing? 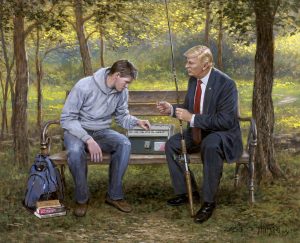 It’s not just that this is a terrible likeness of Trump – if he wasn’t warning someone against reading books I might not have recognised him at all – but it’s also pretty clear that Trump has no idea how to fish. He’s turned up in a suit, for God’s sake. He’s visibly lost weight, too, implying that he’s had no luck catching anything for quite some time. This is demonstrably not the man to teach anyone how to fish, which actually might be the best metaphor in any of McNaughton’s work, even if it is totally accidental.

Whilst I’m uncomfortable generating website traffic for Jon McNaughton (it’ll only encourage him…) I have to admit that it’s worth checking out his entire site. It’s a glorious mixture of bad painting, subtle racism and overt mental illness. For too long, there has been a stigma that people on the right aren’t funny, and Jon McNaughton has singlehandedly overturned that stereotype.

The fact that he didn’t intend to makes it all the sweeter.

All paintings depicted are the work of Jon McNaughton, and are used for the purposes of critique.

Luke Haines is a British writer whose favourite bad painting is Curtius Leaping Into the Gulf, in which the horse is clearly NOT OKAY with what’s happening. Follow him on Twitter @lukedoughaines (the writer, not the horse…)