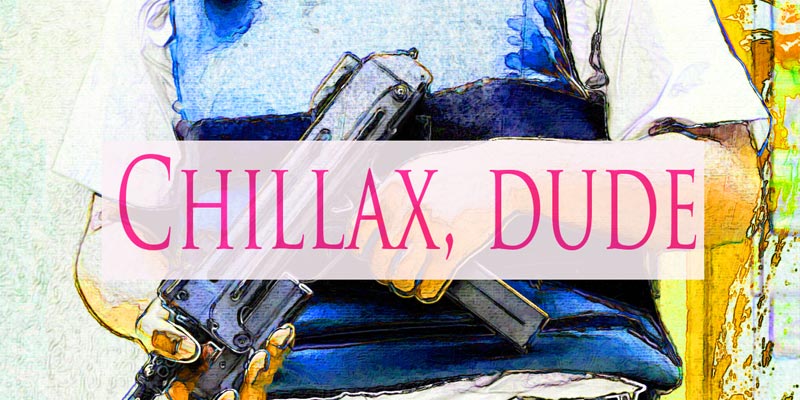 Relax, everybody, please. It’s okay. Calm down. The British terror threat level has been reduced on the official scale.

I know. We can all breathe easy, now.

If you weren’t aware that the British terror alert had been raised (I haven’t checked, but I assume it went up from “Harrumph!” to “Spit take with a cup of tea”), you’ve clearly missed a major news story.

To recap it in the most honest terms possible: Some asshole didn’t blow up a train. At all.

To recap it in the tone of the British national press, however: “THE SKY IS FALLING!! MUSLIMS WILL KILL YOUR FAMILY IN THEIR BEDS BEFORE THE DAWN!”

If — and it’s possible — you need more detail than either of the above sentences, here’s what happened: Some guy whose parents were probably cousins, who was so stupid that he thought a 7th century fairy story was a good reason to go to war, decided to build a bomb in his house and leave it on a crowded subway train.

It failed to go off (see: idiot, above) but instead sat in a corner, sadly fizzing with should-have-been-explosive impotence, and everyone booked it off of the train and the police were called.

Donald Trump, desperate to prove he’d seen at least one Sherlock Holmes movie and was therefore an expert on British law, tweeted something about Scotland Yard already having the perpetrators in their sights. The police (who really do still work out of Scotland Yard because my country is a god damned children’s book) irritably told Donald to fuck off and stop commenting on an ongoing investigation. Since then, two arrests have been made and the whole thing has entirely blown over if not, to the chagrin of ISIS, up.

Honestly, the whole thing was such a non-story that it deserves to be ignored. Unfortunately, the British Government, which has long been a sort of bad tribute act to the American government, decided that they had to be seen doing something, and so raised the Terror Alert Level.

Forgive me, as a card-carrying member of the British public, for being cynical, but I’m confident in saying nobody cared. This is partly due to World War Two, and partly due to the Irish. For several years within living memory, bomber planes rained fire from the sky onto Britain. In the decades that followed, angry Irishmen would periodically blow up parts of the UK, seemingly whenever they felt like it. Both things left a national psychic callus when it comes to being bombed. An actual bomb? Okay, bad. NEARLY a bomb? Who gives a shit?!

If all of this weren’t enough to earn the disdain of the British public, six months ago, in the wake of the Westminster Bridge attack — which, again, was carried out by someone so stupid that he couldn’t get the hang of “bomb” and had to settle for “angry driving” as his method of bringing down the West — the terror alert level was raised to its highest for several weeks. Nothing happened. Eventually, the government sheepishly lowered it, only to raise it again this week as a knee-jerk reaction to an F-grade bomber, before lowering it again today.

It’s such a naked example of the attempted manipulation of public panic that the top level might as well be a cartoon of a boy crying “wolf!”

This is not, of course, to disparage the work of the police. I’m sure a great many terror attacks have been thwarted through long hours and hard work on behalf of the police. But here’s the great thing about the police: They would have done that anyway, regardless of how much the rest of us were being advised to panic.

The Terror Alert Level, which is, of course, an American import, is ridiculous and almost completely ignored.

Why does ANY intelligent country still use it?!

Luke Haines is a British writer who had to Google so many combinations of “President” and “dead” for this article that he’ll probably be filing the next one from an FBI holding cell. He occasionally tweets as @lukedoughaines