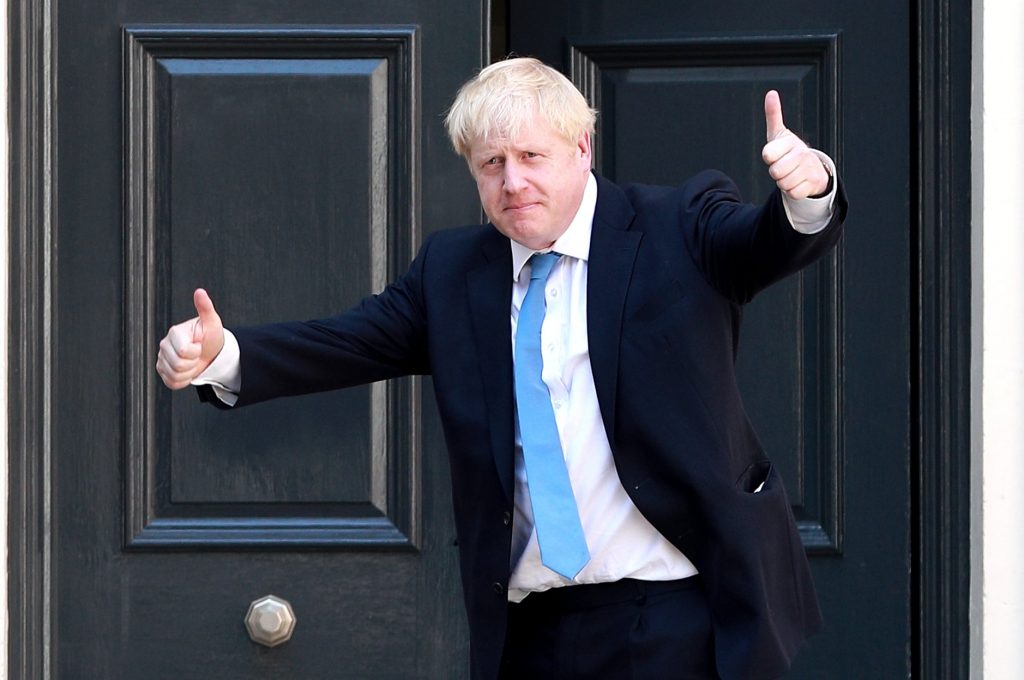 Greetings from the glorious Republic of Boristan, where our Great Leader Boris Johnson has remade the country in his own image!

Gone are the drab days of Theresa May and of the defeatist attitude that Brexit is an iminent national catastrophe! Now is the winter of our discontent made glorious summer by the son of New York!*

Since taking over as Prime Minister, Boris Johnson has promised to rid our sceptered isle of crimes by introducing twenty thousand more police onto the streets, to be paid for by mumble mumble, something in Latin, mutter, mind your business, peasant.

These new police will be trained by some means or another and equipped with… equipment… probably… even though the police themselves have warned that there’s no infrastructure for this and that they don’t even have twenty thousand spare lockers, much less body armour, cars, training rooms, etc etc…

Elsewhere, Boris the Great has promised a brand new rail link for the perennially under-invested North of England, which will bring prosperity and joy to the masses, despite people in the North pointing out it won’t fix any systemic issues, the killjoy, ingrate bastards.

Not that there will be any need for travelling by rail, as his Johnsonship has promised that we’ll all be getting lightning-fast broadband connections.

Of course, Boris is in the earliest days of his ill-gotten leadership, so it’s all fine and dandy to promise whatever he feels like. It’s a move straight out of the Donald Trump playbook with one crucial, fatal difference.

Trump, of course, never really intended to get elected. This was the reason he could freely promise to build a wall and make Mexico pay for it – it was never going to happen. Then the absolute shitshow that was the Clinton 2016 campaign handed Trump the presidency and suddenly the Mango Mussolini had to make good on his promises. Fortunately for him, Trump, through the sort of dumb coincidence that has given him a charmed life, has unintentionally mastered what his pals in Russia call “firehosing.”

Firehosing is a technique whereby a person or government or compant pumps out such a constant, overwhelming stream of bullshit (mixed with the odd truth) that nobody has time to respond to any one part of it. In Trump’s case, he’s a senile, racist idiot with no filter, so by the time journalists could ask him about Mexico paying for his border wall, he’d already said twenty shocking, scandalous things and had at least three staffing disasters in the White House, meaning that the wall was forgotten. And when anyone tried to address any of the abhorrent comments he’d made, they were already buried under a dozen new calamities.

The upshot of all this is that by the time Trump pulls funding from the military to build his wall – betraying swathes of his base in the process – most Trump voters and a good portion of other Americans have forgotten all about the “Mexico will pay” promise. Sure, that was a crazy thing to say, but it was a hundred crazy statements ago, so who can remember?! To the Trump faithful, with their room temperature IQs and housefly attention spans, Trump getting any form of funding for his wall looks like an undiluted win.

Boris Johnson, meanwhile, doesn’t have such luxury. Perhaps through having the bad luck to be smarter than Trump (a common condition in mammals) or perhaps through British reserve, Johnson simply can’t generate headlines and scandals fast enough to bury his own fraudulent claims. Not least because Johnson hasn’t accidentally given himself four years of cover like Trump – he’s painted himself into a corner of only three MONTHS.

On Halloween (fittingly) the Brexit deadline will pass and Britain will be left in a catastrophic “No Deal” scenario. This means that some time in the next three months, Boris has to climb down from the pedestal of his own brave rhetoric and accept the deal Europe is offering. It will be far too short a time after his “No Deal, No Problem!” bluster for all but the dumbest voters to have forgotten, and Johnson will be humiliated.

Except that humiliation is the one thing that BoJo can’t stand. So he may very well plunge ahead with No Deal and send the British economy and all of British business into a devastating freefall. Which will happen a scant three months after he promised the British people the world, and once again: They’ll remember. Not only will the UK not get twenty thousand new police, it’ll get a record breaking devaluation of currency, shortages of food and medicine and very likely the sort of widespread rioting that even twenty thousand imaginary police would struggle to contain.

In a depressingly typical moment of shamlessly copying America like a needy sibling, Britain has elected a racist, right wing conman with laughable hair who promises the impossible. The difference is that Britain is going to see through the ruse a lot quicker than America has. Not because the British people are smarter – they demonstrably aren’t – but rather because Britain’s demagogue is trying to play the long con in a short game. The result will be that everyone loses.

*BoJo was born in Manhattan, but will probably have me flogged for pointing that out…
Posted in Blog and tagged Boris Johnson, British politics, Prime Minister, UK