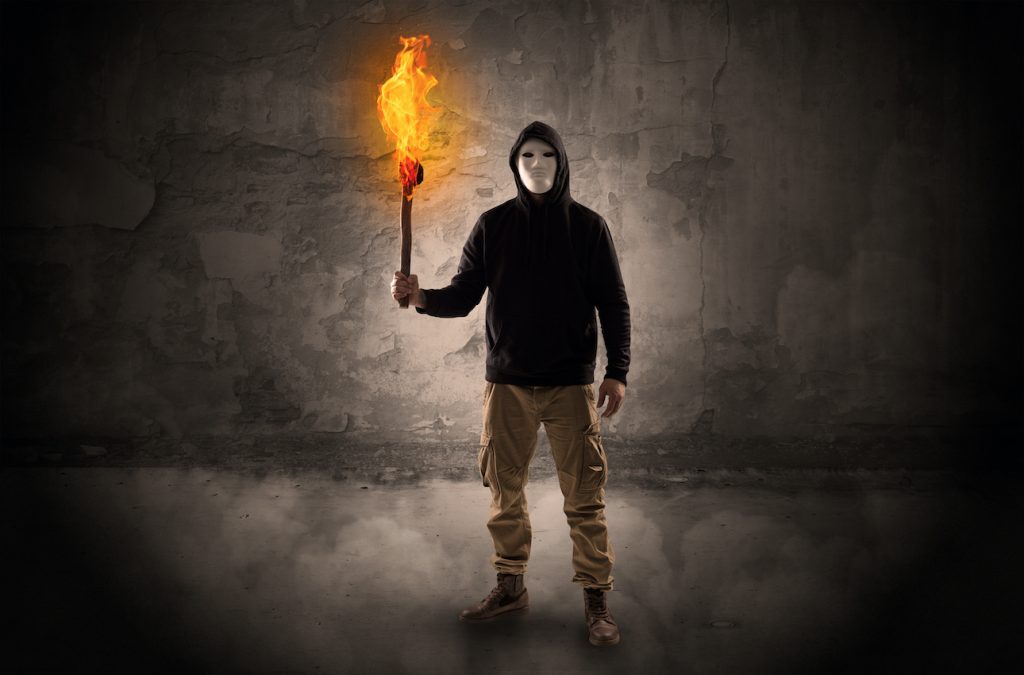 Editor’s note: This article originally appeared on our site on August 21, 2017. It seems, however, a good idea to rerun it. As we enter the 2020 election season, let us keep in mind how high the stakes are in this year. Remember…vote blue!

It’s funny how it will hit you. Reality, I mean. The sudden realization that, by God, this is real. This is concrete. This is not something that’s happening…elsewhere. To other people. To people whose names you do not know.

For me, I suppose it was Charlottesville that did it. I suppose it was watching the videos of the demonstration…seeing all those pale white faces, almost dead white, illuminated by the Tiki torches which would have, at another time, seemed so silly.  But, which, then, at that particular moment, were in fact genuinely terrifying…genuinely deadly…genuinely the stuff of nightmares.

And it hit me because of my son and daughter-in-law…the man and woman who are, for me, the future.

A future, perhaps, in danger.

We had gone to visit them in San Antonio. We hadn’t seen them in ages and my wife and I were eager to do so, even though it wasn’t the best scheduling we could have managed. They are rebuilding a house, you see. He’s an architect and she’s a landscape architect, and between them have the skills to do that sort of thing. They can manage the contractors and tradesmen, and sometimes they are their own labor, even thought they are both working full-time. (I’m envious. If I tried that, it would be a disaster. There wouldn’t be anything left of the place but a smoking crater in scorched earth.)

By August, they’d gotten two bedrooms and two baths finished, as well as the kitchen, and so we accepted the invitation to visit. Maybe it was a mistake. Maybe we should have given them a couple more months. Things were still a little raw when we arrived, and they were very busy with jobs and chores and a new dog and all the rest. There is always so much to do when you’re young.

But, even so, we had a marvelous time. We talked for long hours in the evenings. We took them to dinners and enjoyed the city’s remarkably vigorous foodie scene. (They are, of course, gourmets. So many in their generation are.) We visited galleries and museums. If you get a chance, and you’re in San Antonio in the next few months, do check out the exhibit, “Heaven and Hell: Salvation and Retribution in Pure Land Buddhism,” at the San Antonio Museum of Art. Amazing stuff! My compliments to curator Emily Sano.

And then, one evening, after supper, my son fixed us “Ranch Waters,” soda water with a bit of lime and a splash of very good tequila, and we did what you do, these days, in an age of electronic media, we all extracted our cellphones to check the news.

And there it was.

Those faces…in the night…in Charlottesville. Those men, and some women, chanting the slogans which should have been silenced seventy years ago…those men and women with their symbols of European anti-Semitism and American racism…and those torches…those fires…those golden flames…seemingly warm and comforting in the dark…but, dear God, revealing twisted faces… hate-filled faces, convulsed with purest rage.

Here’s the thing…here’s why I felt ice in my gut… my son and daughter-in-law had been there, in Charlottesville, just a short while ago.

My son went to UVA for his Master’s. She already had hers, but she followed to be with him, and she had a job at Monticello, Jefferson’s home, the site of that complicated man’s complicated legacy.

They didn’t stay in Charlottesville, obviously. She got a job in Brownsville. After his graduation, he did, too. Then both of them moved to San Antonio just after their marriage, which was…what? Two years ago, now. How quickly things happen.

Oh, I trust them. They are wise, and tough, and would have had the sense to get out of the situation quickly and safely.  But, you see my point. The fact that it could have happened at all was enormously if painfully instructive. It shattered what I confess was my complacency.

I fear, sometimes, that this sin of abstraction, this de-blooding of reality, is all too common among some of us, particularly intellectuals.  How easy it is to perceive the Trump threat as being to someone else…to others. To those people, with whom we as good liberals (of course!) sympathize, but who do not live in our neighborhoods, much less our own homes—Hispanic Americans, undocumented workers, Muslims, African-Americans, poor whites…

And the amazing thing is that we can perform this act of intellectual magic for years, and years, and years. Until the midnight raid, until we are ourselves in the cell, we somehow manage to believe that we are secure, that it is someone less deserving who will be dragged away in the night…

Or murdered in the unforgiving light of day.

The next day, we learned of the tragic death of Heather Heyer, and of the two policemen soon after. We did not discuss the news, though. Not in detail. I suspect we never will. It was too close to home.

It couldn’t be kept at a comfortable distance. It wasn’t history. It wasn’t foreign events beyond our sacrosanct shores. It wasn’t a dystopian novel set in some sufficiently remote tomorrow. It was not an abstraction.

It was none of the above.

It is a dreadful and deadly danger…not just to others, but to me, and my own family.

And while I had always known that intellectually, in the cool recesses of my frontal cortex, I had not grasped it emotionally. I had not owned it in the animal way …owned it with the deeper part of me…that part which deals in fight and flight, and thus is vital to human survival.

But, then…those faces, those faces in the golden light…changed everything.

The plane circled the Sandia Mountains. There were a few hints of turbulence in the air…hard air, fierce air…but then it was gone. And the city was below us. And then we came for a landing.

We joined the other passengers in exiting the plane and made our way to baggage claim. The journey was, in a sense, over.

But as I walked, as I considered, I knew.

That animal part of me knows, now. It knows, and understands, and is afraid. It will not allow me to forget. Not again.

And that, alas, is a good thing. For, in an age of torches in the night, of brutish men, of deadly hates…

One sometimes must hear and heed the beast, and stand outside the Tiki light, the false illumination…

With bared fangs. And glowing eyes.