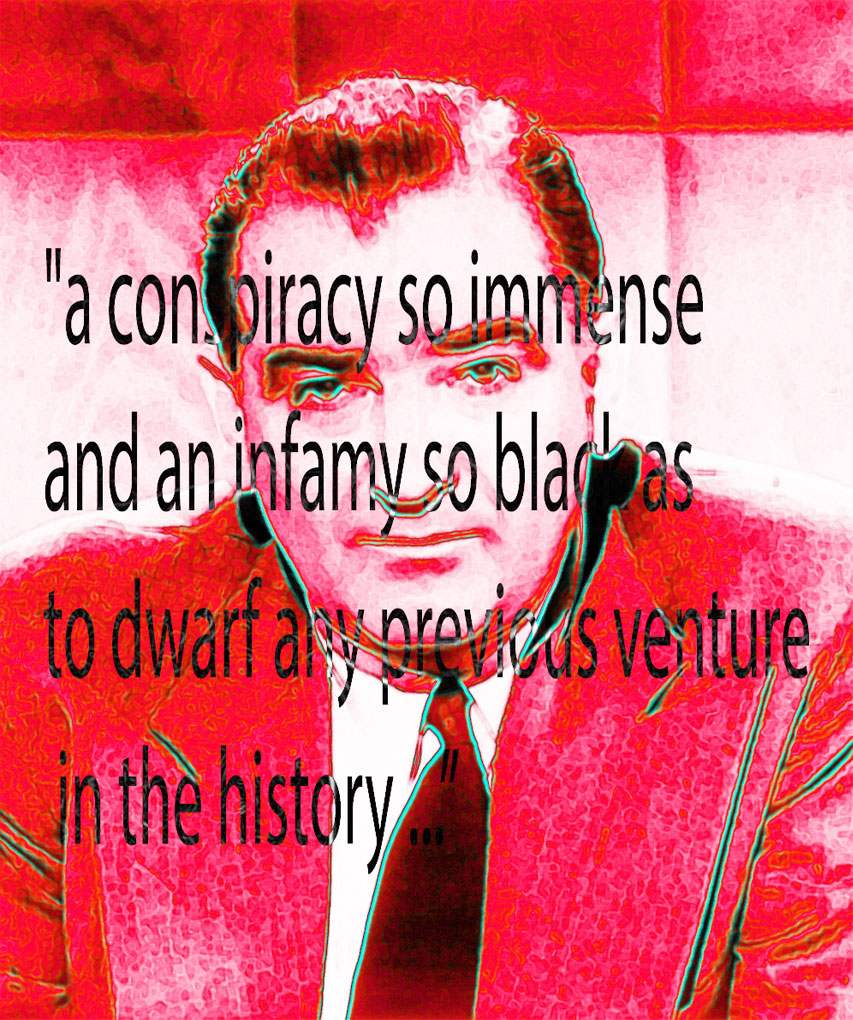 Just the odd thought. I was considering the other day the fact the Right has always been so eager to accuse the Left…us…of being secretly in league with foreign powers. We’re always (in their opinion) traitors, and worse, doing the bidding of someone else…some shadowy dictator or conspiracy located across the seas.

Consider just my own lifetime. In the 1950s, anyone who even dreamed of doing something about inequality or racism or (a concept just stirring then) sexism was, somehow, clearly a crypto-Communist and ergo an agent of the Kremlin, i.e., Russians. In the 1960s, the Russians were leading the enemies pack, but Stalin was gracefully replaced by Mao, and the Chinese got second billing in the enemies category. And, now, anyone who opposed the war or supported Martin Luther King or voted for a Kennedy…was obviously doing the bidding of them…that great and nefarious them from outside our borders.

Okay, comes the 1970s, and it was terrorism (directed, naturally, by the KGB…or so was said) that was the international conspirators’ role. And we, on the left, were at best soft on terrorism…weaklings that we are…and, at worst, actively encouraging it. Then, it was the 1980s and the 1990s, and somehow Communism fell apart, and for a brief moment, the Right was a bit nonplussed. How to claim the Left was treasonous if there were no foreign enemies to say we were treasonable with? Bit of a difficulty there.

But, not to worry. Along came 9-11, and Islam took its place. The new Communism…and, as always, somehow the Left was responsible. Obama was secretly a Muslim and all that…

And, I suppose it will just keep on going like that. Year after year. Decade after decade. Every time someone stands up here in America and suggests that maybe, just maybe, the rich and powerful ought to be doing something just a bit more for those who are neither rich nor powerful…for those, indeed, who may be starving in the streets…then, some future version of Joseph McCarthy will announce that we are in dastardly turncoats for even having the idea, much less suggesting it in public.

I wonder who the foreign power will be in future. Martians, maybe? Colonists on the Moon or the sea floor? Well, it won’t matter. The Right will find someone, somewhere, that we’re supposed to be working for. A conspiracy so immense…etc., etc.

But here’s the rub. Who is actually working with America’s enemies? Who has consistently been hand-in-glove with dictators and would-be conquerors? With those who are, indeed, actively, working against the American way life?

Well, consider. It wasn’t Obama, it wasn’t Bill Clinton, it wasn’t Jimmy Carter who jumped into a pee-stained bed with Putin…

It was der Drumpf.

That was that Paul Manafort, Rick Gates, George Papadopoulos, and Sam Clovis…

It wasn’t us, in other words. Not we upon the Left. We weren’t the traitors and the foreign agents.

It was the Right. All the while. All the time.

What do psychologists say about “projecting?” That is, when you find within yourself the thing within you that you fear and hate the most, and then attribute it to someone else? Casting your own most secret, most cherished sin on The Other?

Well, now, I’d say we had a classic case of it on our hands. Just as a guess.

And once again we find ourselves in a curious world…where those on the Right are willing to sell out their country… their own people…if by they it means they don’t pay one more penny in taxes, or make one more penny in profits.

And then, afterwards, agree that you…for objecting…are guilty of highest, most dreadful…