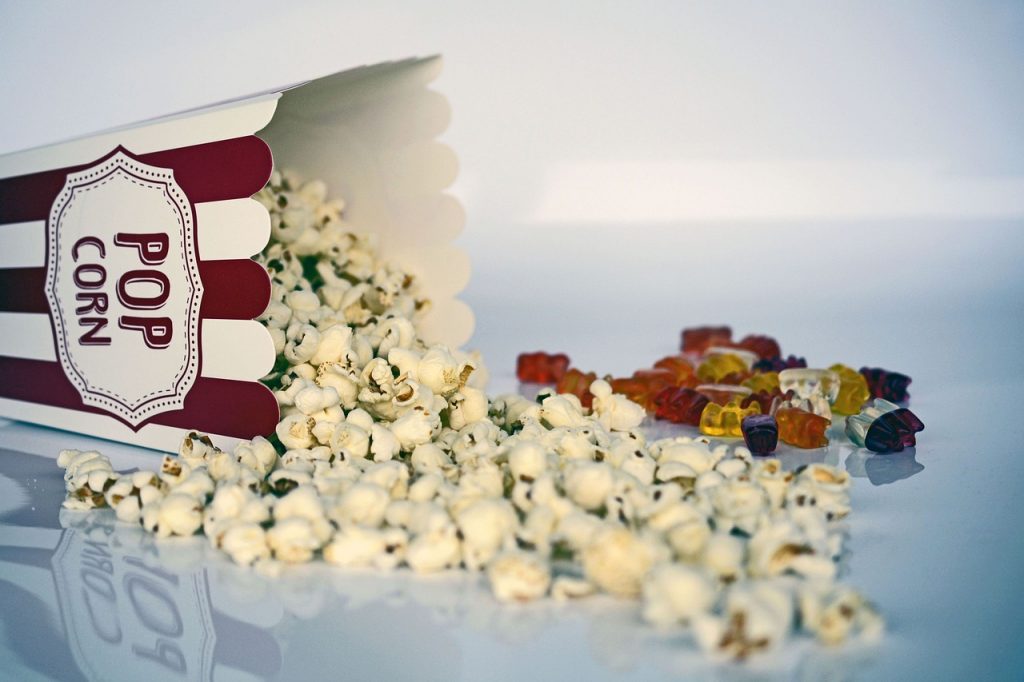 Because it’s 2018 and statements like “I’m against fascism” are somehow once again considered controversial, I’m going to have to call my shots a little, here. Ready? Great.

I am not a racist.

Unfortunately, with Marvel’s latest blockbuster featuring a black cast, a lot of the alt-right have been losing their minds and decrying the film in as many ways as possible. I’m not riding on that particular train.

With that out of the way, however, somebody needs to address some problems with Black Panther.

Apparently, I’m the one dumb enough to do it.

Nobody Reflects On Vampires.

Black Panther has been a bona fide cultural phenomenon. Critics have lauded the Marvel comics adaptation and black audiences have rejoiced in having a headline superhero of their own. Sure, Captain America and Iron Man both have black sidekicks, but that’s sort of the point. Black Panther is a rare movie where the black characters are finally the focus instead of the help.

Not counting The Help, A movie where black characters were both, and… y’know what, I’m getting off topic.

It’s great that the black community can feel that they have their own superhero. Except that they already did.

In 1998, Marvel released its first modern comic adaptation when Wesley Snipes played the vampire hunter Blade in the film of the same name. It was a pretty good movie, spawned a great sequel by Guillermo del Toro and a crappy one by somebody else.

Blade was a major first in all kinds of ways – the first time a Marvel comics adaptation wasn’t terrible, the first franchise to see Ryan Reynolds play a superhero, and crucially, the first time studios realised that comic book adaptations had a built in audience who wanted to see their heroes on screen. I was a comic nerd in the 90s and it’s impossible to overstate what an enormous open goal movie studios were missing. Nobody could figure out why people weren’t already creating mega-franchises like X-Men, Spider-man and the Avengers.

The reason, with hindsight, was that nobody had made a competent comic book adaptation since Batman, and studio bosses had no idea who the X-Men and their ilk were. Nerd culture was yet to take over the world, and when we finally got our movie adaptations, nerds weren’t vindicated so much as irritated – the cool kids were crashing our party.

In 2018, with the party well and truly crashed and over, people are excited to see a black superhero because none of them remember Blade, or the terrible-but-got-there-first “Spawn” movie. Or even the earlier superhero parody Meteor Man. Or Shaquille O’Neal as “Steel.”

Those movies may have sucked (some of them definitely did) but they were all about black superheroes. Black heroes aren’t new. They’re just new to casual observers.

It’s possible that race relations have now eroded so far that Black Panther is the hero we need and deserve in 2018, but that doesn’t change the fact that Blade and others are getting screwed out of a lot of credit right now.

One admitted key difference between Blade, Spawn, Steel and the Black Panther is that the Panther is an emphatically African hero. Unfortunately, this only leads to more problems…

The Black Panther is the defender of Wakanda, a fictional African nation of unusual wealth and power. The source of the nation’s riches is an enormous meteorite made of the super-metal Vibranium, which is buried under Wakanda’s central mountain range.

Vibranium is depicted as being some form of superconductive, ultra-durable material. It has allowed Wakanda to develop space-age technology well ahead of the rest of the world. In order to keep their technological paradise a secret, Wakanda lies beyond holographically generated mountains and portrays itself as a third world backwater.

It’s a great dig at the racist, patronising attitude that much of the West holds towards Africa as a continent, but unfoftunately it doesn’t make any sense.

An opening scene establishes that the gigantic chunk of Vibranium on which Wakanda rests arrived sometime in prehistory. It is implied that it gave rise to the evolution of man or perhaps even the primordial spark. Whatever time frame we’re dealing with, it seems that the people of Wakanda have had access to a miracle substance for thousands of years.

Historically, when one nation or people has a distinct arms advantage over others, they don’t hide it. They invade and conquer their neighbours. Gunpowder is broadly to blame for the white colonisation of Africa in the first place, but Wakanda sat on something far more powerful for centuries?

This flies in the face of everything we know about human nature. Unless, ironically, we are to believe that Wakandans are morally superior to all other nations and people… which is an incredibly racist notion and is also the exact place where colonialism starts.

The desire – or perceived moral duty – of Wakandan leadership to colonise or convert other, “lesser” peoples would be a real danger because…

Wakanda is a monarchy, in the classical sense.

This is a little hard to stomach when the overwhelming response to the film has been about how it empowers downtrodden people. Don’t worry, though – anyone can challenge for the throne (and Black Panther… ship? Pantherhood?!) of Wakanda by means of a fight.

It should go without saying that this is a terrible system of government. Even if we ignore the (yes) racist notion that African countries can only determine rulers through violence instead of higher methods such as democracy, the Wakandan system is wide open to exploitation – there’s a reason we don’t settle international disputes with an arm wrestle.

A literal fight for power leaves an entire (apparently very well armed) nation at the potential mercy of any physically tough despot. Indeed, a big part of the movie’s plot is exactly that – Michael B. Jordan’s trained killer seizes the throne. As it happens, the heroic Prince T’Challa is able to beat him in a rematch fight and regain power, but this can’t be the first time this situation has arisen – how has Wakanda never had a maniac seize power through violence? It happens in reality all the time.

The notion that whoever wins a fight becomes king is exactly the “might makes right” justification that leads to, say, people with guns and warships subjugating people who don’t have those things. Which, awkwardly, is the entire history of sub-Saharan Africa for the last few centuries.

On top of that, the fact that the Wakandan royal family seemingly train their sons from birth to be warriors might work as a plot device, but it is also an unintentionally neat analogy for how people are oppressed in a crooked system. On paper, anybody can become king by winning a fight with the heir to the throne. The same way that, on paper, a kid born in poverty can work his or her way up to become president of the United States.

The reality is that the fight for the crown is basically unwinnable unless you have the money and resources to dedicate yourself to full time martial arts training. The Wakandan royals, of course, do.

All of these ugly truths about the depicted Wakandan political system are perhaps down to bad world building, which isn’t helped when you realise…

In 2008, Marvel took a gamble and made an Iron Man movie. It was a B-list character played by a washed-up star with an untested director, but the groundwork was deceivingly clever.

Iron Man is an alcoholic fuckup, but also a genius engineer. Casting Robert Downey Jr., a man known equally for his brilliance and his substance abuse problems, lead to an interesting synergy between character and star. The sillier comic aspects were jettisoned for a distinctly real-world feel – the Iron Man suit felt like the sort of thing that could maybe be built by a suitably gifted inventor with exceptionally deep pockets.

Long story short, the risky idea of an Iron Man movie paid off.

Fun fact: Every Marvel comic is now printed on glued together hundred dollar bills and inked with unicorn tears because fuck you.

Within the Iron Man films (and resultant Avengers franchise) Tony Stark, the man in the Iron (man) mask, is portrayed as a cutting edge tech genius. And now in Black Panther it transpires that the greatest technological innovations in the established Marvel cinematic universe are small fry compared to daily life in Wakanda.

Again, because it’s 2018 and for some reason I have to make this clear: I’m not objecting to the idea that black Africans can invent things and use technology. All I’m saying is that by making Wakandan technology so far past the cutting edge, they’ve removed all sense of gravitas from the wider Marvel movieverse. We’re officially into the realm of science fantasy with Black Panther, and it doesn’t seem to gel with the rest of the Marvel canon at all – and in the past, Marvel even managed to make a literal Norse god work as a character.

The unrealistic tech is never more egregious than in the Panther’s vibranium-lined suit, which we’re told uses the super-metal to absorb kinetic energy and redirect it. Okay, cool. I’ll buy that explanation, until it transpires that the Panther can do things like fall five hundred feet onto his back and only be winded. If the suit is that indestructible, where’s the sense of danger? And why do people wearing these suits try to settle their differences by punching each other?! If a long fall onto a hard surface can’t hurt these characters, fists definitely won’t. As Wakanda is over-technologied, so the characters are overpowered.

None of this is as important as the “oppressive monarchy” stuff above, but it all adds to the overarching point that Black Panther is overrated. Which is not to damn it too harshly – it’s a fun popcorn movie with some overdone moments. It’s certainly not a bad film, and there’s an argument to be made that it’s just a silly comic book movie. Unfortunately, wider society isn’t treating it as a silly comic book movie (even if it is) and so neither can we.

Black Panther is an entertaining, B minus Marvel flick. What it’s NOT is a watershed moment in black superheroes (as Blade was) or any sort of aspirational lesson for black people in any nation. Africa has enough nations ruled by heredity, corrupt elites and strongmen. That Wakanda is a combination of all three shows that Black Panther isn’t anywhere near as noble a film as people are making it out to be.