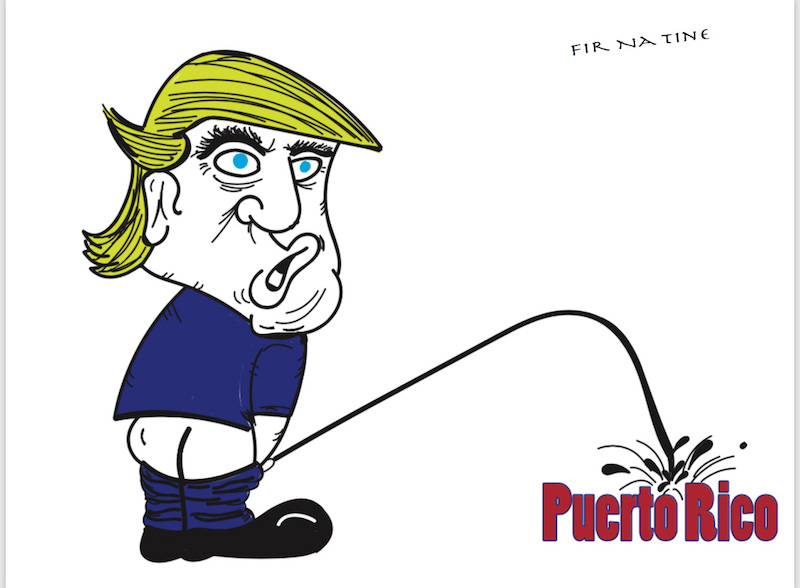 Like most of us, I’ve watched with stunned fascination (read horror) while our esteemed president has reacted badly (or failed to react at all) to the situation in Puerto Rico. He has time and time again behaved incredibly badly in regard to the Commonwealth—being slow and clearly reluctant to send aid, chastising the citizens for being a bit of a “problem” for his sacrosanct budget, and treating the mayor of San Juan as though she, and not the hurricane, were the trouble.

And this, of course, comes on top of the feeling one has that he doesn’t quite understand Puerto Ricans and other inhabitants of U.S. territories in the Caribbean are, indeed, not foreigners…that they are, in fact, citizens of these United States. It’s an impression made all the more potent by his references to “the President of Puerto Rico” and then, later, to “the President of the U.S. Virgin Islands.”

The general betting is that he is just too damn dumb to know better. But, I’ve a sinking feeling that there may be more to it than that. Specifically, I fear he may be perfectly aware of Puerto Ricans’ status, but that he knows his base …and they, his supporters, are either ignorant of the law, or they don’t care what it says. For them, citizenship is no longer something that can be granted by a government (any government) but rather something you’re born to.

In other words, Americans citizens are …for them…white, speak English as a first language, and are Christian—preferably mainstream Protestant, though Catholic will due in a pinch.

And thus, by implying that the Puerto Ricans are not Americans, he plays into that theory of citizenship. He says to his loyal deplorables, “Yes, you are the only true Americans, and all the others are at best imitations, at worse counterfeits, and probably dangerous ones to boot.”

And one wonders, too, if there’s not a subtext…almost, yes, a plot. You see, we’ve never quite faced the question of what the USA is to Puerto Rico, or what Puerto Rico is to the rest of the USA. It isn’t a state, but it isn’t independent, it is a commonwealth which has the option of going either way. For years and years, the island has balanced between those two extremes.

If one were truly paranoid, and one thought that the Orange One had living brain cells, one might suspect that abandonment of the Puerto Rican people was a calculated affront…something meant to re-enforce the notion that there is nothing to be gained from further association with the United States, and that independence was the better option. After all, to use his own line, what have they got to lose?

Then, afterwards, there’d be one less source of brown skins and Spanish surnames coming into the nation.

Which makes me hope, at least, that it doesn’t happen that way. I hope that Puerto Rico makes the opposite choice, and becomes a state—the fifty-first, with representation in Congress and votes in the Electoral College.

And what a wonder that would be…to see the heads of so many bigots explode.

But with more fire, and greater beauty.