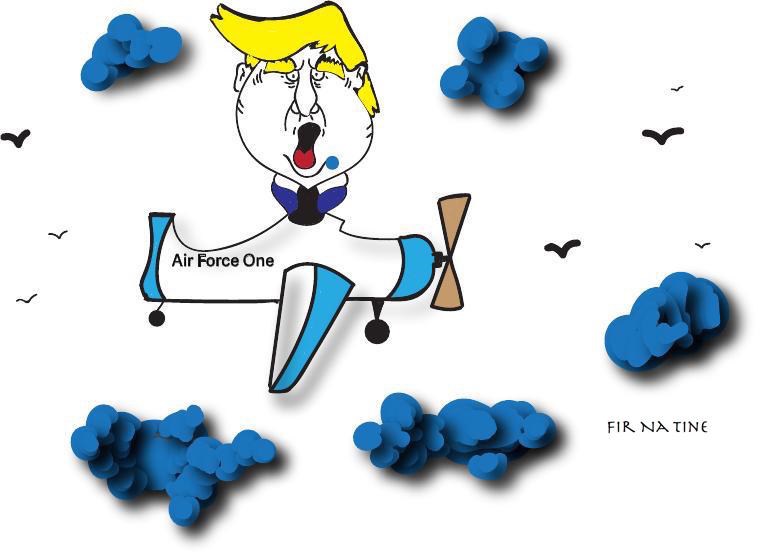 I am sitting here thinking about Tom Price, the Trump’s now (thank heaven) dismissed and disgraced Secretary of Health and Human Services…

It has been some weeks since he was kicked out of office, which makes him kind of hard to remember. There have been so many Trumpsters to come and go…all of them looking rather alike, all of them sounding pretty much the same.

But I write about Price today because, I think, he was uniquely symbolic. You see, he was supposed to be the individual inside Trump’s cabinet tasked with the business of making people’s lives better. He was “health” and “human services” after all. That’s a pretty clear job description, I’d say. Not much room for doubt.

In spite of which…what did he actually do?

Well, among many other things, he lived the life of Reilly (to use a wonderful old expression that you don’t hear nearly enough these days). He travelled the globe…as does now his master Drumpf… on our nickel, via private jets and chartered planes, and when those weren’t to be had, on aircraft that just happened to belong to the military. And they were rather luxurious, these “military” aircraft. They certainly weren’t the cavernous transports that you see carrying men and women in uniform (or caskets) to and from deployment.

And if that is what he did, what did he not do? Ah, he seems to have paid scant attention to the wellbeing of anyone else…that is, to doing any of that boring old health and human services stuff. Not much concern, that is, given to babies in need of open heart surgery, or to elders eating dog food because they can afford nothing more, or to… well, pretty much anything that had to do with anyone but himself and those like him.

Indeed, it seems he is one of those men who detests the whole concept of government assistance to the sick and the needy. At least some of his reported comments seem to suggest he feels if you were not able to pay for your health care…you ought to hurry up and die. Reduce the surplus population, to quote the kindly Mr. Scrooge.

He was, then, a Secretary of Health and Human Services who didn’t much give a damn whether you or any other citizen of these United States lived or died.  Was he, then, a hypocrite? Alas, I don’t think so. I think he simply defines health and humanity very differently from the way that the rest of us do.

In fact, I think he epitomized exactly the underlying premises of this administration…and of the Kleptocrats who support it, and who profit from it. These people, I believe, have an ideology…almost a religion…that it pleases them to call “economic liberty,” or (if they’re being fancy) “anarcho-capitalism,” or, if they’re seeking the common touch, “libertarianism,” (though it has damn little to do with either the middle class Libertarianism of the party which takes that name, or indeed, with liberty).

Regardless of the name, though, it is the belief system of the Koch Brothers, and the vastly wealthy donors who crafted Citizens United, and the unique clique of billionaire plutocrats who make up Trump’s cabinet and government…

And these people believe in themselves. They are the “job creators,” the “wealth makers,” the “Trickle Downers,” the “engines of growth” without whom the economy would collapse. (Haven’t you read Atlas Shrugged, you whim-worshipping altruist?) They are, don’t you see, almost celestial. It is like an inverted Judeo-Christianity in which the rich, not the poor, are the children of God (or at least of Mammon).

And thus Price lived up to his mandate of office, at least as it is defined by such people. In their world, “human services,” means first and foremost Render Unto Your Self, and then, afterwards, to others who are Rich and Powerful. For only the wealthy and the dominant are truly human. The rest of us? More akin to animals…the beasts of the field…the birds of the air.

But if Price, in fact, lived up to expectations so perfectly, then why did he fall from Trump’s questionable grace? Perhaps because he revealed himself too soon. He showed too early that he would happily allow children and the aged to suffer or starve, while he flew first class. If he’d waited a few more years, until the Orange One was enshrined and there was no possibility of democracy and dethronement, then everything would have been fine. But, as it was, he peaked before his time.

But, whatever, he is, as I say, metaphoric…or even instructive. He demonstrates to us the underlying intellectual foundations of this administration—its creed, if you will. He shows us what we may expect of it.

But it will never, ever, even remotely…