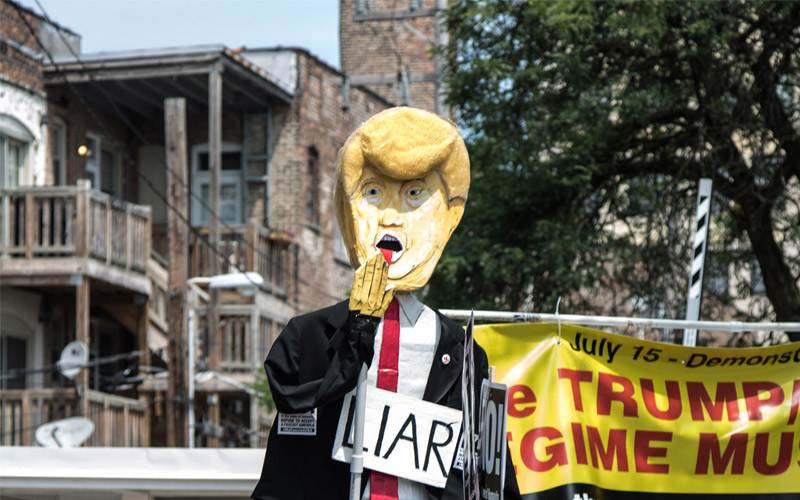 Editor’s note: We are delighted to introduce Luke Haines to LiberalResistance.net. He is a writer based in the U.K., and will be doing his best to share with us the British perspective on our national, orange-colored presidential disaster.

Trump supporters will often make out that the sienna troglodyte is some sort of master tactician—that he’s playing “four dimensional chess” and somehow outsmarting everyone.

As anyone who isn’t delusional can probably see, he’s not. As Groucho Marx said, he might look like an idiot and act like an idiot but don’t let that fool you; he really IS an idiot. However, to extend the chess analogy, it’s sometimes possible for a total novice to get the best of a Grand Master because the grand master will be trying to detect and outwit a strategy that simply isn’t there. In much the same way that sufficiently advanced technology is indistinguishable from magic, absolute cretinism can sometimes look like a plan.

For example, Trump’s incoherence is not part of some ingenious strategy to get people to stop listening to him. Indeed, he hates not being listened to—attention is the closest thing to joy that he’s capable of experiencing. Nonetheless, we’ve stopped listening to him because listening to stupid people is really hard.

Trump never finishes a thought—he can barely start one—so everything he says or tweets is part of the same rambling, looped stream of consciousness that only focuses on how great he is and, simultaneously, how he’s life’s great victim, and that doesn’t matter because he’s winning anyway even though nobody will admit it because he’s so tremendous it doesn’t matter how badly everyone treats him, which they don’t, because everyone loves him.

He’s a walking iteration of that terrible advice that used to be given to kids; that someone only bullies you because they like you. Trump seems to think that the only reason the press attacks him is due to jealousy or perverse adulation.

It’s not, Donald. I can’t speak for the entirety of the press, but this particular corner of the liberal media hates you because you’re a crooked, rapey asshole and you’re doing enormous harm to your country and the planet as a whole. I don’t want you to resign so that I can have a go at being president—unlike you, I’m smart enough to see how stressful a job that would be ahead of time—I want you to resign because you suck at it. It’s not just that you don’t measure up to previous incumbents. It’s that most of those incumbents had pets I’d trust to run a country better than you.

Bo Obama, seen here trying to eat a microphone whilst not sympathising with Nazis.

It’s almost as if Trump is trying to make everyone’s brains work harder to understand him so that we can make up for years of under-funded public education. Admit it—you never had to think this hard to understand that eloquent pussy Obama. A Trump speech is a genuine workout for your cognitive faculties.

Perhaps because of this required effort, or perhaps because human beings are too adaptable and we quickly get used to things that should really panic us, like the fact that every August for the rest of time you’ll now be able to windsurf across Texas, people have now started ignoring Trump.

It’s something we do at our peril. Not because Trump has anything worth saying, but because some of his ramblings are terrifying, and we should never let them go unchallenged.

Just the other day, in a Tweet before the one where he brags about working in the White House all weekend (pro tip, Donald: that’s your fucking job) and before he designated September 3rd a national day of prayer for the victims of Hurricane Harvey, like some primitive tribesman dictating that his people appease the angry Storm Gods, there’s a tweet in which he casually threatens a nuclear conflict:

Maybe this is a misunderstanding. Maybe Trump just means that interpretive jazz dance is the answer, or that we should try negotiating in semaphore, or that the people in North Korea speak some kind of foreign language—probably Chinese or Muslimian or whatever—and therefore talking to them is futile.

But it feels an awful lot like Trump just said that the solution he favours in a tense standoff with a nascent nuclear power is to go to war.

If anyone wants me, I’ll be digging a bunker…