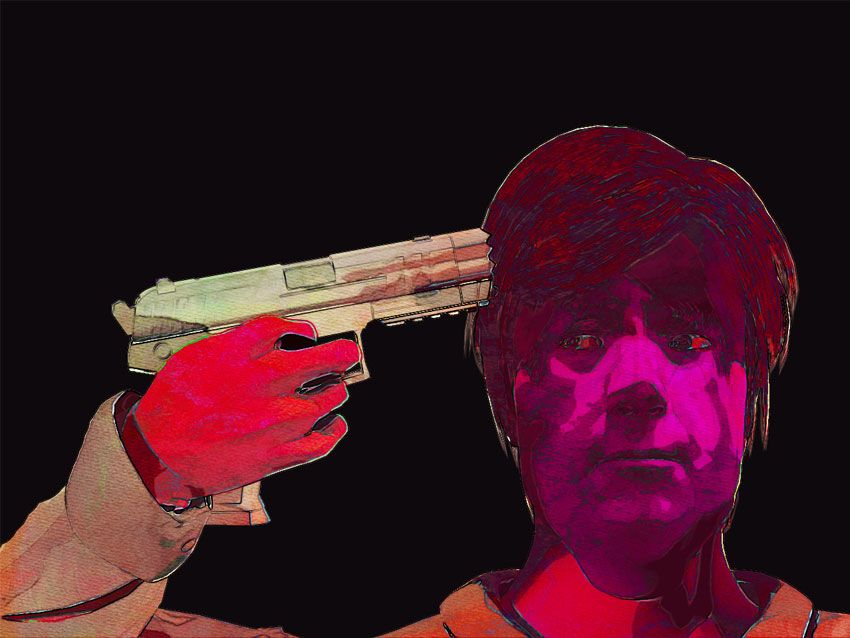 So I’m a little uneasy about writing this one. There is a chance that I’ll lose friends, because of it—particulalry among Democratic Party stalwarts, who may think I am being divisive at a time when we desperately need unity.

I fear that the Left in general, and the Democratic Party in particular, may no longer be capable of genuinely moving large numbers of voters. I fear, in fact, that it has become self-destructive. I fear, most of all, that the Party’s controlling apparatus is now inert and, maybe, repressive.

And to explain why I fear such a thing, I’m going to talk about two men and the Party’s reaction to them: Bernie Sanders and Al Franken.

Let’s start with Bernie Sanders. Not that long ago, the DNC quietly purged Sanders supporters and anyone who smelled like a Progressive from its ranks. There was a considerable flurry of protest at the time (see, for example, Concern of Progressive Purge as Bernie Wing ‘Left in the Cold’ at DNC by Jake Johnson at CommonDreams, and It’s Still Their Party: What the DNC Purge Means for the Democrats’ Left Flank by Branko Marcetic in In These Times). But, despite those expressions of concern, and despite the genuine outrage among progressive voters, the DNC and the more powerful members of the Party have said nothing about the Purge (except to deny it happened), and have made no attempt to seek some sort of rapprochement with the millions of mostly younger people who supported Sanders, and who found themselves shuffled aside.

Yet, it is exactly these people…the young Sanderites…who will determine the future of American politics. In not that many years, they will be the majority of the voters on the Left. Any rational person, then, looking toward the future, would court them.

But, this is not happening. The Bernie-Bros and Girls are being ignored. Their concerns are simply not being heard. Their input is not required…

Moreover, it isn’t just the Sanderites who are being dissed by the Party Establishment. Indeed, all young people, and people of color seem to be unwanted. Thus, what could be the single most important comment about the current state of the Democratic Party is an anguished and eloquent complaint, I’m A Brown Woman Who’s Breaking Up With The Democratic Party by Saira Rao, in a December issue of the Huffington Post. In the piece, Rao notes that she has worked faithfully for the Democratic Party for her entire adult life.

Finally, and with an all too understandable bitterness, she turns on the Democratic establishment that has betrayed her and says, “You are a party of white feminists. Of white feminism, the kind of feminism that focuses on the struggles of white women.” Later, she adds “… for every Kamala Harris, Maxine Waters and Pramila Jayapal sticking their brown and black necks out for me, there are dozens of white female Democrats who want me to shut my trap, and say please and thank you. I should be grateful for scraps while white women enjoy a proper marriage with you…I’m done with all that.”

She concludes that she will, from now on, withdraw her support until she sees signs of real concern for people like her in the Party. Until then, nothing. And she ends, “In the meantime, I’ll be on the sidelines waiting, watching, hoping, praying. You broke my heart.”

There is something truly terrifying in that. If the Democratic Party has a future, it will only be if it has the support of people like Rao.

Now, let’s move to Al Franken. As you know, he was recently forced from office after reports of sexual improprieties. I am still not convinced that he was actually guilty of such crimes. But, guilt or innocence didn’t matter. What mattered was that he had been accused, and with great pomp and circumstance, he was drummed out of Congress.

Let’s now say what cannot be said. The whole business had a touch of McCarthyism to it…

Please, for heaven’s sake, do not get me wrong. If someone is genuinely guilty of sexual harassment or abuse, then they need to be punished. But, I am concerned by the fact that a man who had done much good for the Left in Congress, and who was a potent and charismatic representative of our beliefs, was utterly destroyed without due process.

I wouldn’t be the first, of course, to point out the irony of the fact that men on the Left are having their lives ruined for crimes of which they may or not be guilty, and simply on the word of accusers whose motives may not be exactly what they seem…while men on the Right are immune from those forces—as evidenced by the fact that Trump himself, the sexual molester in chief, remains in place.

But the real issue…what I think may be almost as distressing as Franken’s unwarranted disgrace…was that there remain some curious questions about exactly why it happened and who was behind it.

Well, a few people in Congress did…and particularly Kirsten Gillibrand who seems to be considering a run for the White House in 2020. It helped her in that Franken’s exit removed a perhaps too attractive potential rival for the presidency, and gave her excellent street cred as the major punisher of white males in Congress.

Who else did it aid? It helped Wall Street types, large donors to the Party, who now are rid of a man that was a little too close to Bernie Sanders and Elizabeth Warren for their taste.

And last…it helped the DNC and the Party Elite, neither of which was comfortable with Franken, who was an outsider, had no Beltway credentials, and had begun as something as undignified as a comedian. Definitely Not Our Class.

But the rest of us? Did we gain anything? Did we profit? Did the Left profit?

No. Honestly, I don’t see that anyone else…none of us on the ground… gained a damn thing.

My point, I’m not convinced that those who rule the Democratic Party—the DNC, the big donors, the Beltway insiders—aren’t a bit of a problem. They simply don’t seem genuinely connected with the voters. They seem…well…not to put too fine a point on it, and I say this with an apology…to be a bit like the Republican stereotype of Liberals—elitist, arrogant, and depressingly out of touch with the wants and needs of the people they’re supposed to be representing.

Which is very troubling. It means that we…I mean, the Left…may take back the White House and Congress in 2020 and 2018, but our victory might be short lived, indeed. We will have removed a corrupt and incompetent kleptocracy, but we will have replaced it with something that is merely a lesser evil. We will have gone back to Business As Usual.

And it was that Business As Usual which got us into this mess in the first place. If the Democratic Party had been really listening, had been really watching, it would detected the hatred building up under the placid surface of the American scene, and it would have acted early to address that passion before it could metastasize into the Orange One.

But, it wasn’t watching. It wasn’t listening. It noted that the stock market was the on the rise, that the economy seemed to be doing okay, and that urban areas with lots of a high tech companies were thriving…and never bothered its pretty little head about everyone else…all those men and women who were being left behind.

Thus, even if, in 2020, we remove Trump, only to put a Business-As-Usual candidate in his place, then, rest assured, another Trump, and maybe a worse one, will be on the way.

So, let us hope I’m wrong. Let us hope that the Democratic Party’s elite is really moving rapidly behind the scenes. Let us hope that the elite’s seeming inaction (when it comes to social issues) and its seeming hysteria (when it comes to removing internal dissent) are only illusions. Let us pray there is, somehow, a hidden hand, moving quietly toward the reformation of the Party, and a new Progressive America.

But if there isn’t…

Then we need to face the moral and intellectual bankruptcy of the Party…and turn instead to Our Revolution, and Indivisible, and the Social Democrats of American, and MoveOn …

And consider new, something bold…

On completing this piece, I found some articles on Franken and Gillibrand which readers may find useful for background.

The Trouble With Kirsten Gillibrand: Now, some Democratic senators have expressed remorse that they jumped on the push-Al-Franken-off-the-cliff-without-a-hearing train. But its conductor is full steam ahead by Ciro Scott, 01.05.18 5:00 AM ET, The Daily Beast.

Senator Al Franken’s Resignation Is Deeply Unfair: As the senator is expected to officially resign Tuesday, many Minnesotans don’t believe he should have stepped down—and he never got a fair process with the harassment allegations by Michael Tomasky, 01.02.18 5:00 AM ET, The Daily Beast.