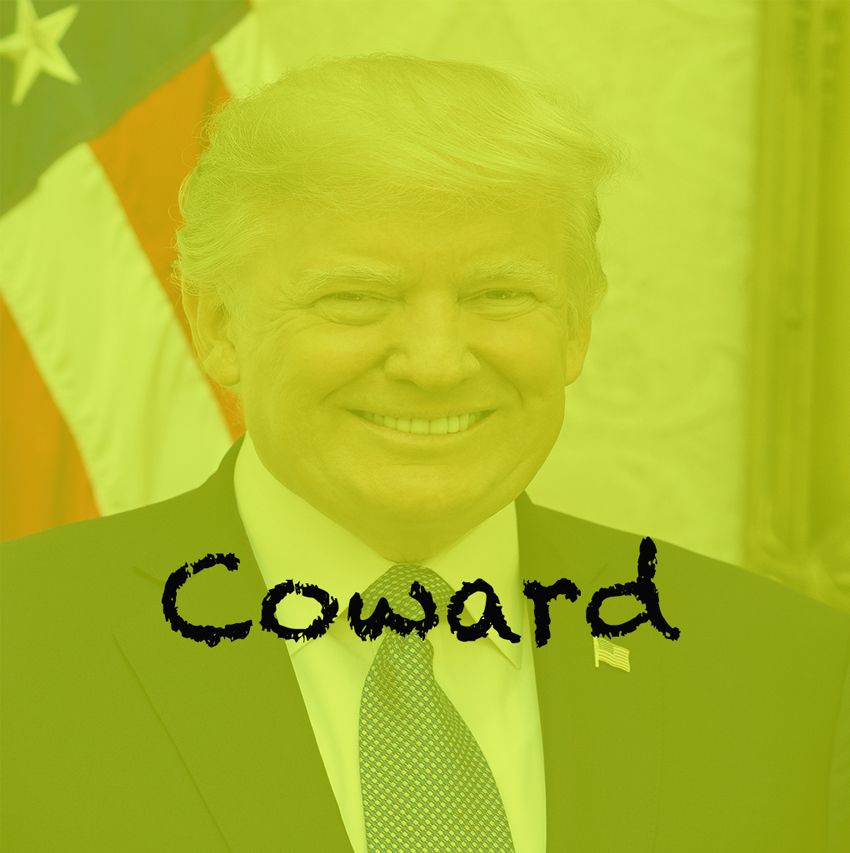 Trump doesn’t know who I am, but I’ll bet that if he did, what he wouldn’t like about me is that I have more balls than him.

Consider this: I often, and publicly, insult Trump. I would quite happily stand on my roof and call him things that would make a sailor blush.

I’ll do it on camera,

I’ll do it online,

I’ll do it when drunk on cheap box-packaged wine.

I’ll do it in private,

or as public stunt,

there’s no way I won’t call The Donald… all the names I think he deserves.

[NB: Americans are strangely squeamish about the word I was aiming for, there. I avoided it to spare your blushes, not mine.]

I’m willing to say all this despite the fact that the man I’m insulting is backed by a gigantic military industrial complex which is not above abducting people and torturing them. I do it because it’s what I believe.

Donald, meanwhile, doesn’t have that kind of chutzpah. He won’t even admit the obvious. He doesn’t have the balls to say he doesn’t like black people. He isn’t brave enough to show who he is, like these people are:

He lacks, to borrow an excellent phrase from Christopher Hitchens, the cowardice of his convictions.

As I write this, news is breaking that the Trump administration is withholding aid from Palestine, having already declared Jerusalem to be the capital of Israel.

There will be plenty of bluster and obfuscation, but let’s be clear: It’s because Palestinians are predominantly Muslim. Trump hates and fears Muslims because he doesn’t understand anything about them.

Trump only decided to run for President in the first place because he was angry that a black man got elected. He and his bone-stupid ilk were so incensed by it that they began a fruitless, lunatic quest to prove Obama was illegitimate because they just flat-out didn’t want a black guy in charge. They tried to couch it in language that was neutral – that he was secretly from Kenya and therefore illegitimate under the constitution – but couldn’t actually tell you anything about the constitution when questioned.

These are the same people who claim to worry about transgendered people using the “wrong” bathroom because it might lead to rapes, but who never previously gave a shit about rape statistics.

I’m sick and tired of watching racists and homophobes and misogynists try to argue that they’re not racist, homophobic or misogynistic. If you want to voice an opinion in public, say what you mean and own it. You don’t like black people? You don’t give a shit about people from Muslim countries? You’re against gay marriage because it makes you uncomfortable?

Show some real courage and say those things out loud instead of hiding behind whatever technicality you’ve chosen this time. Let’s start being honest and get this whole fight out in the open where it belongs.

My side has the courage to call Donald Trump out, and he has nuclear missiles.

Donald Trump doesn’t even have the backbone to admit things he said in front of a roomful of witnesses.

I’m saying that makes you a coward, Donald. What are you going to do about it?