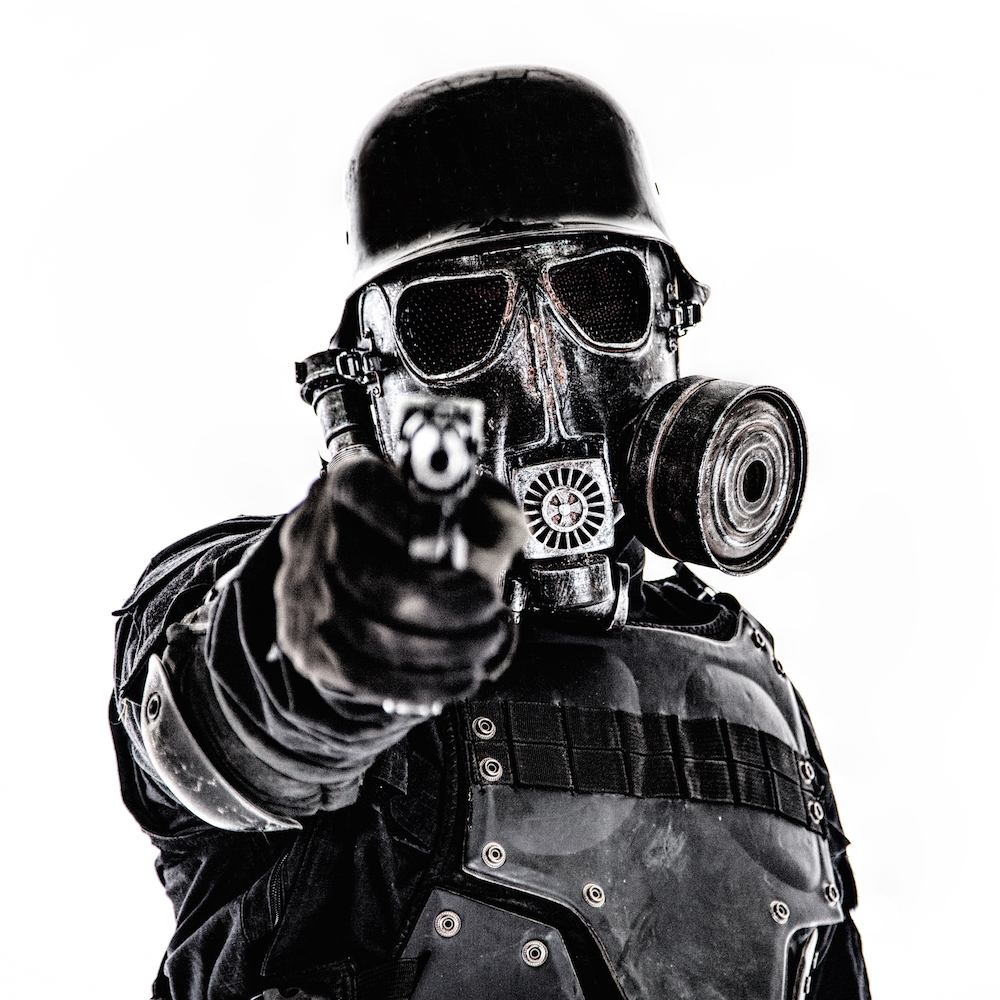 Yesterday in New Jersey, armed gunmen took part in what has fairly been described as a “battle” with police for several hours.

After an initial confrontation in a cemetery in which the police were apparently fired upon with high powered rifles, the suspects fled in a van and barricaded themselves inside a Kosher supermarket, trading gunfire with the police for several hours. When the whole sordid ordeal was over, six people were left dead, including the gunmen and one police officer.

At the time of writing, no motive has been made clear. It is, however, troubling that the dead police officer was part of a team tasked with confiscating illegal weapons, and that the choice of a Jewish business as a place to make a stand was reportedly deliberate.

There is, however, a lot to unpack on a deeper level than just that of a tragic and violent crime. Here, for example, is the photo that was widely shared of police arriving on the scene during the standoff: 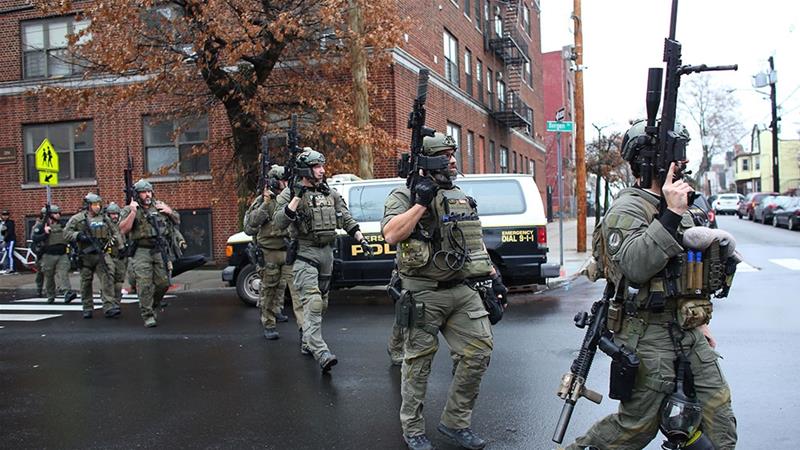 There are nine men in body armour visible, the nearest carrying a rifle and a submachine gun, and all of them equipped with grenades, surpressors, side arms, and so on and so on. This is what happens in 2019 in America when you call the police. Not the army, or the Marines, or even the Expendables. Small wars have been fought with less hardware than the average police department can now bring to bear.

The first argument we always hear about the police being so heavily armed is that criminals are now better armed than ever, so the police need such outrageous amounts of firepower in order to keep up.

People who make this argument – essentially the argument that the only way to stop there being so many guns is if your side has more guns – don’t seem to notice that it would put a more effective end to the whole cycle (and save a lot of money and bloodshed) if America stopped letting anyone who felt like it have an assault rifle in the first place. To spell it out: If it was difficult to get hold of assault weapons, maybe there wouldn’t need to be police departments tooled up like a 1980s Schwarzenegger character.

With the money that the government saved on, say, not buying the local PD a fucking tank, they could maybe do something useful like pave the roads or fix the water supply or invest in programs that are designed to stop violent offenders BEFORE they start playing Butch and Sundance with the town constabulary.

The primary lobbyists against this kind of thinking tend to be the NRA, who have a clear interest in everyone buying as many weapons as they can physically carry, and then a few more for the wall just in case. The NRA are, of course, an extension of the big arms corporations, who are making profits hand over fist.

If a lone maniac (or a dangerous terrorist, which is the same thing only browner) decides to buy an assault rifle, the gun companies make money. If the government then decides to equip every police department with adequate firepower to STOP a maniac with an assault rifle, the gun companies make a shitload of money. Violence and public death are great for the bottom line over at Ruger, Colt et al.

There are those who would argue that reducing the amount of firepower available to the police would limit their ability to protect the public. Ignoring the fact that police don’t get called to a situation until the shooting has already started and thus can never protect every victim no matter how well armed they are (but that there would be fewer victims in the first place if the perpetrators were themselves less-well-armed,) everyone should be a little uncomfortable about a police force with an objectively overwhelming amount of firepower.

In a perfect world, the police would be entirely comprised of noble and just men and women who want what is best for all members of society. Unfortunately, time and time again we see that there ARE crooked police, there ARE racist officers and there ARE abuses of power at every level. Whilst this is undoubtedly an unfortunate facet of human nature that will probably never be entirely weeded out no matter how hard we try, is it really the best idea to take a group of people – some of whom we know will be corrupt, racist and mentally unstable – and give them military grade armaments like candy on Halloween?

What’s particularly odd is that the second amendment types who argue that every American should have a gun in case the government takes over are usually quiet about police departments being able to field small armies.  Take a look at that picture from New Jersey again and ask yourself if a bunch of drunk guys named Bubba, Zeke, Enos and Bubba are going to hold out for long if the government DID want to take them down. It doesn’t matter how many “Don’t Tread On Me” bumper stickers you have on your truck, you can’t fight off that much firepower using nothing but an AR15 and untreated diabetes if local law enforcement DOES decide to tread on you. These people want smaller, less powerful government, but apparently a smaller government with bigger guns.

Of course, these are the same people who spent years preparing to fight back if fascism took over America, and they conspicuously failed to turn up when it finally did. But if the government ever does something really crazy, like using Socialism to raise the minimum wage or give their kids free healthcare, you’d better believe they’ll turn up in force.

Then they’ll wish they hadn’t been so happy to encourage a cycle that sees crazy people buying military weapons, the police buying bigger ones, and the arms manufacturers laughing all the way to the (blood) bank.