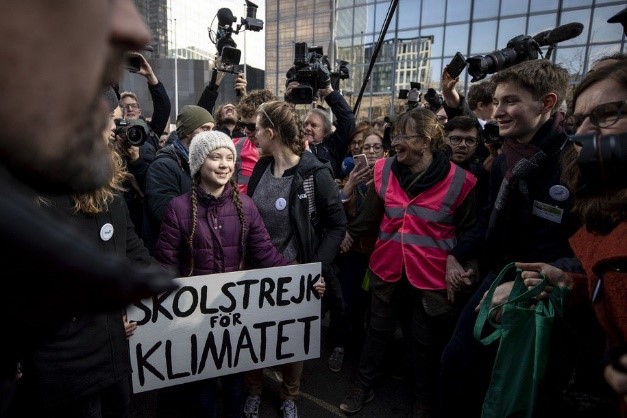 (For the purpose of greater clarity and succinctness, I have excerpted sections and lightly edited a blog by Jonathan Cook on consortiumnews.com, 10/01/19)

She is a Ready-made Davina Confronting a Corporate Goliath.

The sixteen-year old Swede, Greta Thunberg, and her generation are living on a dying planet, a planet the older generation – through their greed, their alienation from the natural world, and their spiritual emptiness – plundered and despoiled with no thought for those who would follow them.

The people who organized the pillage are our leaders, an elite that dominate the economy and control our politics and the media. But we all conspired in the planet’s destruction. We bought the unnecessary goods they produced and marketed. We believed in their fairy tale of endless growth on a finite planet. We allowed ourselves to be distracted with mindless entertainment while the planet grew hotter and choked on our pollution.

The idea that any adult has the right to tell Thunberg and the millions of other children we betrayed that they should simply shut up, stop the strikes and go back to school to finish their studies is ludicrous – and insulting. Teach them what? Teach them the same foolishness, the same selfishness that we were raised on in those educational production lines that turned us into compliant, consumption-loving drones? Do these children really need yet more of the neoliberal brainwashing that prevents most adults from going on strike too to save the planet?
***

The inevitability of the climate catastrophe we now face was predicted with absolute precision – almost to the week – by scientists working for the fossil fuel industry back in the early 1980s. They knew long, long ago that this moment was coming. The corporations successfully stalled a response for four decades so that they could keep ravaging the planet undisturbed. And we fell for their deceptions and time-wasting over and over again.

If the sky has already fallen in, [the neoliberal corporate dominated  society argues] then there is no point trying to save the planet. Its fate is sealed. The best response to unstoppable climate breakdown, they will argue, are technical fixes (that will once again line their corporate pockets) to delay the worst effects while we all carry on regardless, partying till the music stops. We will be urged to plunder for our team before the other side gets its hands on the last of the goodies.

If the corporations are creating or adopting a figurehead to neuter the climate movement, Greta Thunberg is a strange choice indeed. Her forthrightness has been liberating. Her indignation and anger emboldening. Her guilelessness infectious. Her youthful commitment a sharp, shameful slap in the face to our own laziness and world-weariness.

Does it mean, now that she and her protests have exploded on to the international scene, that our corporate rulers will not try to co-opt Thunberg or her cause? Of course not. It is a given that they will seek to redirect these new, dangerous passions in futile and fruitless directions.

Thunberg is not Wonder Girl. She will have to navigate through these treacherous waters as best she can, deciding who genuinely wants to help, who is trying to sabotage her cause, and which partners she can afford to ally with. She and similar movements will make mistakes. That is how social protests always work. It is also how they evolve.

Thunberg and the next generation have an even steeper hill to climb than MLK. They must change our relationship not just to the worst elements in our societies but to the planet itself. That will require an entirely new vision of our future – and the place where such a vision is most likely to take root is among the ranks of the young, those whose idealism has not yet been crushed by our education and career systems.