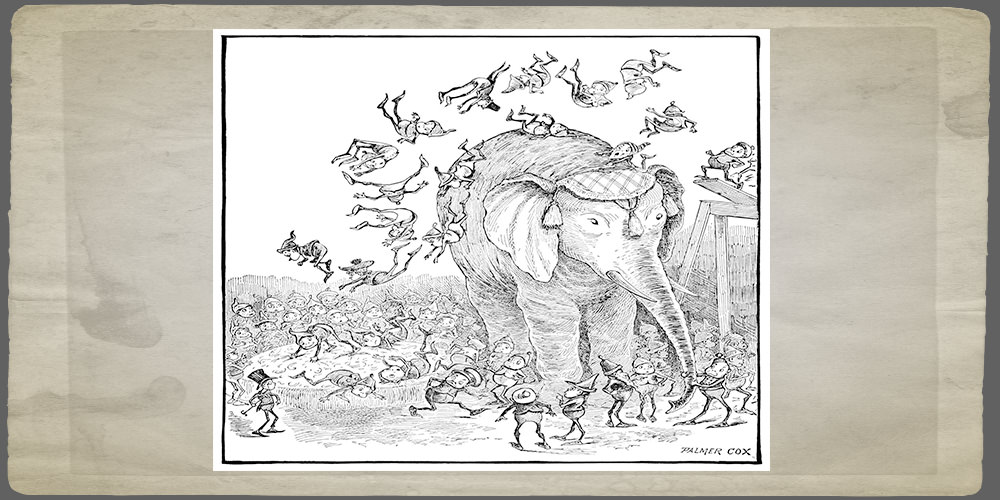 About a thousand years ago, in summer 2016, there was a rumour going around that Ted Cruz was the really dangerous Republican candidate. “You think Trump would be bad?” People began to scoff. “Hooo, boy, it’s Cruz you’ve got to be worried about! He’s the real right wing lunatic!”

Eighteen months later and we can safely say that we were justified in worrying about Trump. Was Cruz a cause for concern? Sure. But he’s also never praised a Nazi rally, so let’s go ahead and apply Occam’s razor. The dangerous madman was the one who seemed like a dangerous madman all along.

In the spirit of that, and in the hopes that maybe - just maybe - America can learn from a mistake and recognise an obviously bad idea when they see it, let’s look at some of the rumoured candidates for the 2020 election.

First, let’s address the rumour about Dwayne “The Rock” Johnson.

For those unfamiliar with professional wrestling and godawful movies, Dwayne Johnson is a huge Samoan man who rose to prominence elbowing people in the face whilst wearing speedos.

He parlayed this into a film career which has seen him appear in schlocky B-movies from the “Fast and Furious” franchise to the upcoming “Rampage,” a film inspired by the 1980s arcade game which was, itself, a Godzilla/King Kong pastiche.

Dwayne Johnson is, first and foremost, a good man. He is renowned for being kind to fans and making time for the public, and he does a lot of work for charity. He is of mixed black and Samoan heritage, so he is not short on racial empathy, and his work rate is punishing - he frequently rises at 5am to work out, reading movie scripts whilst using the cross trainer. Switching to White House hours wouldn’t be much of a stretch. He’s also surprisingly sensitive, playing classical Spanish guitar as a hobby.

On the other hand, Dwayne Johnson rose to fame body-slamming men in tights for a living. Every cliché about Americans being stupid (and I hate to break it to you, but that’s the stereotype in the rest of the world) is going to be underlined in permanent red ink if you elect President The Rock. You’re on thin enough ice already, in “ridiculous President” terms.

Next up, and not a million miles removed, is Hollywood actor Ron Perlman. A stalwart character actor who often works under heavy prostheses, he is best known as either the comic book demon Hellboy in the first two movies of the same name, or as a murderous biker patriarch in the series “Sons Of Anarchy.”

Like Dwayne Johnson, Perlman is more than just a rumour. He has admitted to seriously considering a 2020 Presidential run on a number of occasions.

Perlman is a staunch liberal, which is encouraging, and like Johnson he has enough macho credentials to avoid easy “liberal pansy actor” jibes. He has also threatened to beat InfoWars’ Alex Jones into a bloody pulp.

On the one hand, I’d recommend voting for anyone with a “hospitalise Alex Jones” policy, even if their only other policy was firebombing my house. On the other hand, it DOES betray Perlman’s aggressive temperament. There’s no doubting that he is a kind and generous person - he once underwent the three hour prosthetic makeup process to become Hellboy just so he could surprise a sick kid in hospital -but he may also lack the kind of nuance that a good president needs. If the office of President involved regular bar fights, Perlman and Johnson would make excellent candidates. But politics is not a bar fight. It’s often more a cross between hostage negotiation and chess.

Both Johnson and Perlman are smarter than Trump - although, again, so is Johnson’s jockstrap - but are either of them as smart as Obama? Or even Bush Senior? The dumbing down of America will continue apace as long as people continue to elect actors and athletes instead of intellectuals and diplomats.

What about a celebrity who is neither an actor or an athlete? One who has been drawing a lot of attention as a prospective candidate in recent weeks? Yes, I’m talking about the big O.

No, not Roy Orbison. He’s been dead for thirty years and as a result is only slightly better qualified than Trump - although he would at least have shielded his eyes to look at the eclipse.

I’m talking about Oprah Winfrey. She recently came out and said that she wasn’t going to run, but there’s a saying in politics: Never believe anything until it’s been officially denied. And call me a contrarian, but I think Winfrey would be a disaster.

Is it time for a woman POTUS? Absolutely. If the last female candidate hadn’t come with an airport carousel’s worth of political baggage and a rapist for a husband, we’d have one right now. Oprah, however, is not the woman for the job.

Oprah is the woman who unleashed the quack Dr. Phil on the nation’s airwaves - a man who was later the victim of a class action lawsuit over bogus diet supplements and who apparently believes in psychic powers. Oprah also gave a show to Jenny McCarthy, the shrillest and most dangerous voice in the anti-vaccination movement.

If Oprah believes in McCarthy and Dr. Phil, she’s an idiot, so credulous that she lacks even the base mistrust of others that Trump evinces.

If she doesn’t buy McCarthy or Phil’s respective brands of snake oil but sees their monetary value, then she is an example of the exact cynicism and avarice which has brought American politics to its current nadir.

What America needs - aside from a good five cent cigar - is someone with Perlman’s killer instinct, Johnson’s charm, both men’s compassion and quite possibly Winfrey’s gender. What’s lacking is the sort of political skill and high intellect that used to be prized in America.

The Democrats need a genuine liberal with political experience who is smart and tough and charming. If politics has become so venal and shallow that such a person can no longer be found, the world may well have bigger problems than just Donald Trump.

NB: Liberal Resistance writer @bossbird17 has been working to interview genuine political candidates, who may well have the needed qualities. Check out her work here.

Luke Haines is a British writer who would, quite honestly, like to see President Hellboy or The Rock In Chief. But that’s because he’s an incorrigible child. Follow him on Twitter as @lukedoughaines