According to Chaos Theory, a simple set of rules cannot be imposed on a complex system without causing a catastrophic breakdown. Many of you will know this if you’ve ever tried to open a dinosaur safari park.

A slightly more contemporary example can be see in Britain’s continued pursuit of the racist pipe dream that is Brexit. “We’re going to leave the European Union!” declared the Brexiteers, and… that was it. No bigger plan, no endgame, no real ideas.

“But Britain’s relationship with the European Union is built on forty years of shared laws and regulations and trade deals,” some of us pointed out. “You can’t just say ‘We’re leaving!’ and hope that that’s enough – it’ll be a disaster!”

“Brexit means Brexit!”, they replied. Then two and a half years went by, and everyone who argued for Brexit woke up, seemingly as one man, and realised that there was no plan in place, nobody had any idea what was about to happen, nobody could agree on a strategy and the whole debacle was going to be finished in less than a month, when Britain was due to crash shambolically out of the EU and become a laughing stock.

Enter Prime Minister Theresa May, a woman who seems to be some sort of zen masochist. She’s completely serene about the ongoing disaster, and also seemingly enjoys being humiliated and punished. Having negotiated a trade deal with the European Union so bad that the chief negotiator resigned so that he could vote against it, May’s proposed deal between Britain and Europe was voted down by the British government in the largest defeat in political history. Unperturbed and presumably slightly aroused, May went back to Europe – whose ambassadors had long declared the matter closed – to seek a new deal.

The European Union refused to change anything, much, as they’d already been clear that they weren’t going to make further changes the last time they saw May. Unconcerned, May re-typed her deal in a different font (I’m not making that up) and put it to Parliament again, where it was again voted down in a slightly less savage (but still resounding) manner.

May then pulled the ace from her sleeve: She anounced a plan to vote on the same deal a third time.

The only person who seems to have a solid plan in regards to Brexit is Vladimir Putin. Two weeks ago, leading members of the campaign to leave the EU were spotted on a skiing trip to Veneto, the home territory of Italy’s Lega Nord. For those whose sticker book of Italian fascist groups isn’t up to date, the Lega Nord are ultra-nationalist far right Italians who once seriously proposed dividing Italy in half, because anything south of Rome was “too close to Africa” for their tastes.

Recently, it emerged that the Lega Nord had received financial backing from none other than Russia’s handsome, macho and popular leader (unless you like being shot) Vladimir Putin. Why does any of this matter? Because one of the arch-Brexiteers seen in Veneto was Aaron Banks, a man who was found guilty of campaign finance crimes in the run-up to the EU Referendum in 2016. Specifically, Mr. Banks is suspected to have used enormous quantities of foreign money, as well as hiring the social data firm Cambridge Analytica, to swing the vote to “Leave.”

It’s all a little complex, so to recap: Aaron Banks used “allegedly” Russian money and the same firm implicated in Trump’s victory to tip the scales in favour of Britain leaving the EU. The whole thing screams “Russian interference.” Recently, Banks has taken a trip to talk to far-Right politicians in Italy who are ALSO funded by Russian money.

Britain has absolutely no hope of getting a Brexit plan in place by the end of the month, and as such will have to ask for an extension of Article 50, the legal document which stipulates Britain’s resignation period from the EU. Without an extension to Article 50, Britain leaves the EU at the end of this month, regardless of whether anything is figured out or not. The UK is on its own from the 29th.

In order to extend Article 50, the European Union has to unanimously agree to grant an extension. A unanimous vote requires the Lega Nord.

So: A man guilty of using Russian money to push for Brexit recently visited a fascist group who are ALSO funded by Russia, and who can force Britain out of the EU. Which is what Russia has wanted all along.

We’re leaving the EU on the 29th with No Deal. The bribes have already been paid. It’s a done deal and due to the embarrassment that is the British press, most people don’t even know about it.

I tried to put a bet on all this, of course. A three-way accumulator on Brexit actually happening, No Second Referendum (there isn’t time) and No Deal (see above) was running at 80/1 odds on a site I checked. When I tried to place that bet, betting sites are no longer taking accumulators. I even went down to my local bookie, who laughed when I asked if they were taking Brexit bets, as though it was any more ridiculous than normal British betting on which rapist can kick a ball into a net at the other end of a field. Either way, no dice. Still, if you’re in the U.S. and can find a way to bet the above, please take a moment to do so. I see no reason why Vladimir Putin should be the only person to benefit from all of this.

I mention Vlad because even Brexit’s biggest champion, Nigel Farage, isn’t doing so well anymore. Farage, the human equivalent of the lingering fear that you didn’t quite get all of the dog shit off your shoe, tried to organise a mighty “March For Brexit,” in which all of the legions of Leave voters would travel on foot from Sunderland in the North to London in order to make their voices heard. It was a deliberate evocation of the Jarrow March, except that the Jarrow March was organised by the working classes and the organisers actually took part.

Those poor unfortunates who have any experience of Nigel Farage – which is to say most of the UK – immediately knew that the millionaire scumbag was never going to manage a 200-mile march covering 20 miles a day in the company of people who don’t have investment portfolios. The chain smoking, alcoholic fascist and former investment banker began the march with the people he claimed to represent, then swiftly disappeared because he claimed that hosting his radio show was more important.

Not that it mattered. The March marked yet another moment when Brexit pirouetted between tragedy and comedy, as around seventy people turned up, many of them pensionable, in order to trudge through the howling gales and grey, joyless drizzle of Sunderland in the winter to prove a point that no longer mattered. 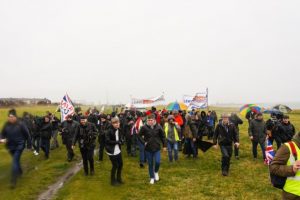 That’s all of them. The whole march.

However badly your day goes over the next week or so, just know that somewhere out there on the roads of Britain, there is a dwindling group of the elderly, the racist, the confused or all three, plodding relentlessly onward in the rain, convinced that Brexit can be a success, and convinced that any day now, the multitude of Brexit supporters that they’re sure are out there will emerge to join their glorious crusade.

Except Nigel Farage. He’s at the East India club, with his feet up, probably on the phone to Vladimir Putin.