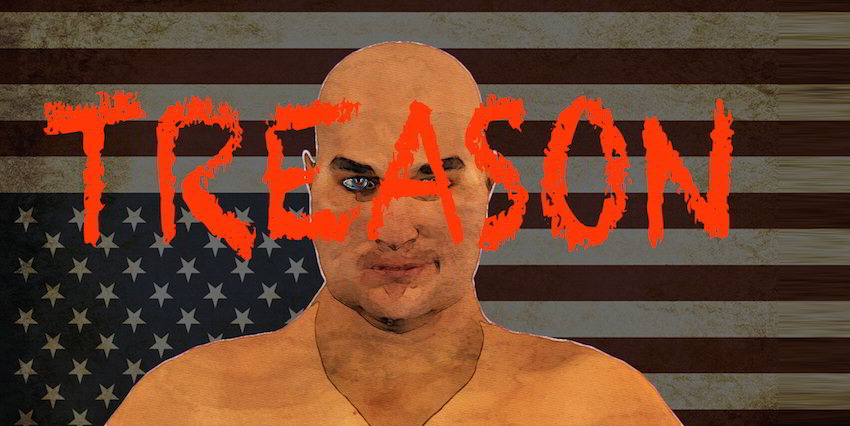 Whoever, owing allegiance to the United States, levies war against them or adheres to their enemies, giving them aid and comfort within the United States or elsewhere, is guilty of treason …

The indictments were revealed this morning. We know, now, that Paul Manafort and Rick Gates are off to jail, or at least to court, charged with every white-collar crime from money laundering to being unregistered foreign agents. We know, too, that Trump’s foreign policy advisor George Papadopoulos had secret meetings with Russian agents and lied about it. We know that Putin and the KGB and God alone knows who else were involved in it all. We know that Mueller and his people are using the term “Conspiracy Against the United States.”

Let’s say that again. Let’s say it together. Let’s be certain we understand what it means: Conspiracy Against The United States of America.

It means that the election of 2016 was rotten through and through. We suspected but now we know that the GOP cheated and slandered and libeled and used foreign money to put Trump in the White House as a Russian puppet.  And it means that the Republican elite was just fine with all of it, thank you very much, so long as they got their tax cuts and could smear Obama and the Clintons.

It means that the men and women behind Trump…the plutocrats and morbid narcissists, the media pundits and right-wing think tanks…were actively working to undermine the nation. They were taking aid and comfort, and enormous amounts of money, from our most deadly enemies. It means that they are Quislings, and collaborators, and fifth columnists, and they don’t give a damn about the country, or about you, or about anyone but themselves.

It means that we are now ruled by a corrupt and criminal elite that aims at our destruction and our enslavement as a national policy. They aren’t just incompetent. They aren’t just making choices that happen to be wrong. They are deliberately doing us harm. They are the opponents of democracy and the apostles of tyranny. They are undermining all that we hold dear.

It means that they have levied war against us.

So…what does Conspiracy Against The United States mean?

It means treason. Nothing more and nothing less.

And the law on that is strong…and eminently clear.