Editor’s Note: Luke Haines has given us a truly bizarre parody of the Tolkien books which also, somehow, takes a few shots at greedy BabyBoomers…including his loyal editor (that would be me). So, without further ado, here is episode three. It contains the obligatory titillating busty innkeeper’s daughter. Plus a pig shed.

The town in the valley below turned out to be Laketown, because inventing an entire language for Elves is easy in adventures like these, but a catchy name for a town by a Lake is apparently impossible. The locals were dressed mostly in burlap sacks and the streets were paved with mudd.

That’s not a typo – they couldn’t afford actual mud and had to make do with a low-rent Chinese substitute. Everywhere I looked was squalor and deprivation. And a Starbucks, and a branch of Subway. And one of those ranks of yellow drop boxes for Amazon deliveries. But other than that, just horrific poverty.

“Gentrification not been through here yet, huh?” I asked the Innkeeper.

“Ooooh, arr, ahhh,” he said, along with other rustic vowel sounds that seemed to imply he was agreeing with me.

“Do you by chance have anything to drink that isn’t watery ale in an earthenware mug?”

“Ooooh, narrr, ahh, no,” he said. He went back to rubbing a new, clean tankard with a filthy rag so that it would match all the other soiled receptacles.

“I thought not,” I said, wondering why the hell I’d written myself into this genre to begin with.

“You’ll have to forgive my father,” said a female voice. I turned around, surprised that this story might even have a chance at passing the Bechdel Test, to see a busty innkeeper’s daughter. On the downside, it meant that the odds of feminist equality in this story were once again dashed, but on the upside: Busty Innkeeper’s Daughter. 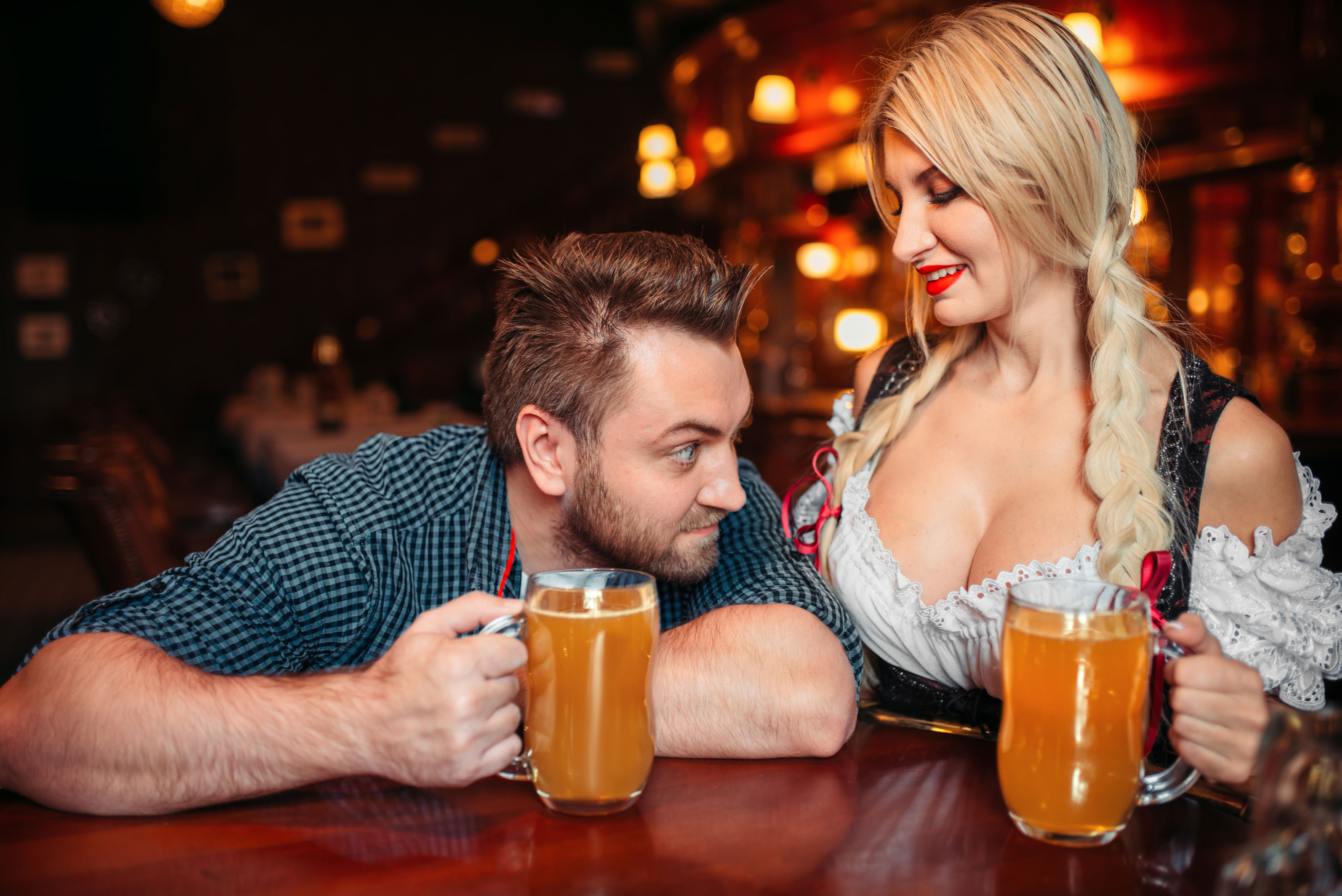 “We used to have a nice Inn here, once,” she continued, “but then the hypermarket opened down the river, and they sell ale and barley wine far cheaper than we can.”   “Do they make a decent Old Fashioned, or am I going to have to wait until I’m in a noir story for that?” I asked.

She ignored me and continued: “Most people would still come to a tavern for refreshments if they could afford to, but everyone is very poor since the dragon took over the mountain and began to hoard all of the riches. Every year he demands more gold from us.”

I’d been distracted somewhat by her low-cut tavern wench’s attire, but something she’d said had caught my attention, there. Something gold… something refreshment… boobs… concentrate, dammit…

I snapped my fingers when it came to me. “One second, go back. Did you say something about a dragon?”

“The dragon, yes,” she said. “Boomer, they call him. He has reigned over the mountain since before I was born, twenty-one nubile, cleavage-y years ago.”

I’ll admit there’s a chance I’m embellishing what she said, but that was definitely the gist.

“And this… Boomer… hoards all the wealth up there at the top, so nobody else gets a chance to improve their lives?” I said.

“That’s an accurate summation and a heavy-handed metaphor, yes,” she nodded.

“Well then,” I said, hitching up my belt and stretching, “Looks like I’ve got a dragon to rob.”

“Please,” she implored, “At least stay for some of our ales and peasant spirits that we distill ourselves. We are but humble innkeepers and desperately in need of custom.”

In my heroism, I took pity on them and drank until I woke up in a pig shed.