Editor’s Note: Luke Haines has provided us with a parodic series of short pieces saying terrible things about Baby Boomers (like his editors) and nasty, horrible warty creatures (also not like his editors). This is episode two.

It was a long flight to the Lonely Mountain, but ultimately worth it. It cut out a lot of songs, some woodland scenes with spiders and an extended section involving riddles and Andy Serkis, who looked terrible. I can only assume that Hollywood success has given him some sort of meth problem. 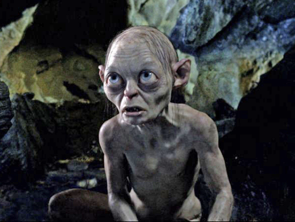 Not that I would logically know, of course, because we skipped all that and flew straight to the later parts. The huge raptors carried us all through the night, until a pale yellow dawn kissed the horizon, and a blood red sun slowly crept up beneath it.

“It’s another tequila sunrise,” I pointed out to the eagles. The one with its talons on my jacket gave me a look like it was seriously considering dropping me. “One of these nights…” the look seemed to threaten.   As the sun rose, the birds deposited us gently on the slopes of the mountain. “Take it easy!” I waved as they flew off, and several of them glared at me again. I knew I was pushing my luck with all the eagles puns, but sometimes you just have to take it to the limit one more time.

“Gather ‘round,” said Studly, commandingly. “This is what we came for…”

He reached into his tunic and pulled out an ancient map, covered in runes. “According to this map,” he said, “There is a secret door in the mountain, located here…” he pointed to the illustration on the map, and then turned to look at the dark edifice looming above us. Thunder rolled atmospherically. You get the idea.

“Once the door is opened, there is a secret passage where three may walk abreast.” He paused a moment. “Please stop giggling,” he said to me, wearily.

“Sorry.” I took a moment and composed myself. “Just, y’know. A breast.” I cupped my chest and pantomimed to the assembled dwarves. Got nothing in return. Cleared my throat. “Please continue,” I said.

“Your job as the thief will be to climb up and see if you can sneak into the mountain,” Studly said.

“What’s everybody else going to do?” I asked.

“Nothing. You’re the thief.”   “…and doing nothing takes twelve of you, plus a wizard?”

“That’s the standard model for this sort of thing, yeah.”

“Jesus Christ,” I muttered. “So much dead weight. You know audiences only remember a maximum of seven characters, right? You’re dwarves, you should appreciate the value of having seven guys…”

“We’re Dwarves, not Samurai,” said one of them.

“Yeah, and you’re certainly not magnificent,” I scowled. I turned to the Wizard Corbyn. “What’s your plan for all this?”

“Well… We could smoke our pipes and sing folk songs?”

“I’ll start climbing,” I said, and started up the mountain before anyone produced a tambourine.

“It’s too late in the day to start climbing now,” said Studly. “Why not leave it until tomorrow?”